A Canadian living and working in Nepal has been ordered to leave the country within two days after criticising the government on social media, according to a Nepali official.

Robert Penner, a computer programmer working for CloudFactory, an outsourcing company, was arrested at his office on Monday and taken to the immigration department for questioning.

He criticised the Nepal government on social media during unrest that followed the passing of Nepal’s constitution last year and also denounced the recent arrest and detention of Kanak Mani Dixit, a prominent journalist and civil rights activist.

Dixit was released from detention on Monday on the orders of the Supreme Court.

Nepal Immigration released me after 26 hrs in custody, cancelled my working visa & gave me 2 days to leave Nepal. Thanks to all supporters.

“If he fails to leave within this timeframe, he will be considered as staying here illegally.”

“The decision was made based only on his tweets, but such allegations cannot be substantiated just by his tweets and personal opinions,” he told AFP news agency.

“There is no evidence of any crime committed linked to what he has said.”

The deportation order was issued after government officials received numerous complaints about tweets and online writings that Penner had posted, said Neupane.

He declined to elaborate on exactly who and how many had complained. 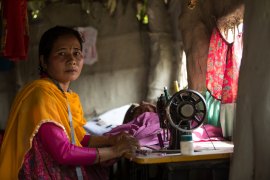