The chief peace negotiator of Syria’s main opposition bloc said on Sunday that he was resigning over the failure of the UN-backed Geneva peace talks to bring a political settlement to the Syria crisis.

Mohammad Alloush, who is also the representative of the powerful Jaish al-Islam rebel faction in the Saudi-based High Negotiations Committee, told Al Jazeera that the peace talks failed to secure the release of thousands of prisoners languishing in regime custody.

“The peace talks failed to stop the bloodshed of our people, failed to secure the release of thousands of detainees or to push Syria towards a political transition without [Bashar] al-Assad and his criminal gang,” he said.

“The international community need to put serious pressure on Russia and Assad to stop the killing of our people.”

The UN-backed parties have not set a date for the resumption of the peace talks after the High Negotiations Committee suspended its participation over the intensifying of regime air strikes in recent weeks.

Meanwhile, Syrian rebels have taken two villages from the Islamic State of Iraq and the Levant (ISIL) as they fought to undo gains made by the group in a surprise offensive days earlier, activists have said.

Rebels retook the villages of Kafr Shoush and Braghida on Sunday, expanding their buffer around the rebel-held town of Azaz, home to tens of thousands of people displaced by war, according to the Local Coordination Committees, an activist network inside the country.

ISIL, also known as ISIS, took Syrian rebels by surprise on Sunday when they launched an offensive that threatened to seize Azaz and isolate Marea, another rebel-held town north of the contested city of Aleppo.

More than 160,000 civilians have been trapped by the fighting. The international medical organisation, Doctors Without Borders (MSF), evacuated one of the few remaining hospitals in the area.

The rebel pocket around Azaz, which connects to the Turkish border, is surrounded by ISIL to one side and the predominantly Kurdish Syrian Democratic Forces (SDF) to the other.

The ISIL advance prompted a rare deal between the SDF and rebels on Saturday, according to the Syrian Observatory for Human Rights, a UK-based monitoring group.

It said that the rebels surrendered control of a village near Marea to an SDF division in exchange for allowing 6,000 civilians to evacuate to areas under Kurdish control.

Elsewhere in Aleppo, government air strikes targeted the neighbourhood of Sakhour on Saturday and killed at least six people, including five children, the Observatory said.

Fighting continued between government forces, rebels and ISIL in other parts of the country on Sunday.

The strikes on the al-Waer neighbourhood killed at least seven people and injured 17, including four children, according to the Observatory.

Al-Waer has been under government siege since 2013, according to the monitoring group Siege Watch. The UN says nearly half a million people are trapped in sieges in the Syria war. 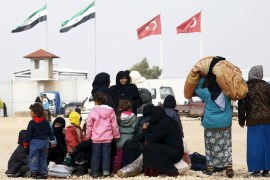 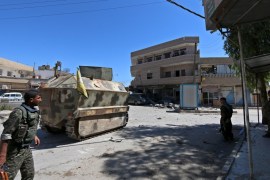 US-backed coalition of armed groups aims to oust ISIL from its de facto capital of Raqqa. 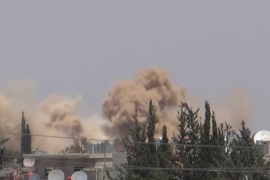 Around 12,000 people, including 3,000 children, under siege by government forces with little food or medicine, says NGO.