Iraq’s military has warned civilians against returning to Ramadi after dozens were killed by mines apparently planted by the Islamic State of Iraq and the Levant (ISIL, also known as ISIS) group in the city’s streets and buildings.

Iraqi forces reclaimed Ramadi from ISIL fighters in December and tens of thousands of residents have moved back to Ramadi, the provincial capital of Anbar, in the past two months.

Most of them have returned from camps east of the city where they took refuge prior to the army’s advance late last year.

A spokesman for the Anbar governor’s office, which is overseeing much of the effort to restore Ramadi, confirmed that the military had issued the directive because it “felt the need to stop the return to ensure that the areas are safe”.

He said that it was not clear when people would be allowed to return to Ramadi and declined to comment on what would happen to the residents who had already moved back.

However, Ramadi’s mayor said he expected the freeze to last for a day or two while authorities investigated whether the city was properly cleared of explosives.

Official statistics indicate that 49 people have been killed and 79 others wounded in Ramadi since the start of February, but the UN has said that those figures are “almost certainly an underestimation”.

Mine clearance is seen as a critical first step in returning civilians to Ramadi, which a United Nation team said last month suffers from destruction worse than anywhere else in Iraq after months of fighting that saw ISIL bomb attacks and devastating US-led coalition air strikes.

More than 3.4 million Iraqis across the country have been displaced by violence, according to UN statistics, most of them from the minority Sunni Arab community.

In Sunday’s other developments, clashes between Kurdish peshmerga forces and Turkmen Shia paramilitaries killed nine people in a northern town and cut a strategic road between Baghdad and Kirkuk, security and medical sources said.

The clashes between the peshmerga and the Turkmen, who belong to an armed fighters’ umbrella organisation known as the Hashd al-Shaabi, began at around midnight and continued into Sunday, officials said.

Both the peshmerga and the Turkmen fighters are battling ISIL, which overran large areas north and west of Baghdad in 2014.

But Kurdish forces and the Hashed al-Shaabi are vying for influence in some areas, a contest that has led to violence in Tuz Khurmatu. 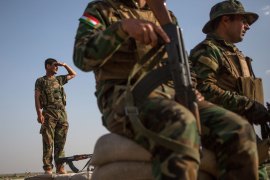 Since the operation to retake Mosul began, displaced civilians have been streaming into Iraq’s Kurdish region. 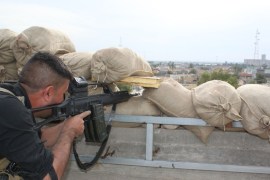 Residents say they are trapped in “ghettos” amid growing fears of a new wave of ethnic violence. 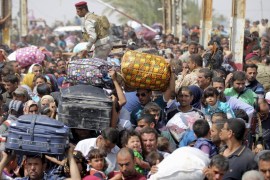 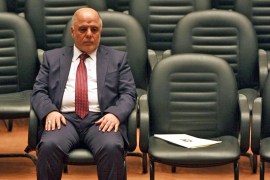