A United States voter advocacy organisation has launched a lawsuit over “systematic” electoral irregularities in New York’s presidential primary that led to more than 125,000 Democratic voters being dropped from poll rolls for unconfirmed reasons and denied their right to vote.

Shyla Nelson, the spokeswoman for Election Justice USA, told Al Jazeera that the group’s lawsuit, filed against New York’s Board of Elections at the Federal District Court in Brooklyn on Monday, is calling for provisional ballots from reportedly disenfranchised voters to be counted before the primary’s results are certified.

“We are preparing for a hearing that will happen next week, during which those provisional ballots will be reviewed, as well as all of the evidence that we collected from plaintiffs whose registration was in one way or another disrupted – despite having proof of being registered as Democrats,” Nelson said.

“They found their voter registration and party affiliation altered prior to the election,” she said.

“And we have reports that at certain polling stations on Tuesday, people who requested provisional or affidavit ballots were told there was no such thing, which is false.”

New York’s Attorney General Eric Schneiderman announced on Wednesday that his office was launching an investigation into alleged vote irregularities after the state’s board of elections received a barrage of reports of disenfranchisements.

Schneiderman’s office said it has received more than 1,000 complaints from voters across the state, a major rise from about 150 reports it saw in the 2012 general election.

“By most accounts, voters cast their ballots smoothly and successfully,” Schneiderman said in a statement. “However, I am deeply troubled by the volume and consistency of voting irregularities.”

He also set up a hotline for voters to report any setbacks encountered at polling stations.

“Voting is the cornerstone of our democracy, and my office is deeply committed to ensuring equal access for all eligible voters on Election Day,” Schneiderman said.

“I urge all New Yorkers to immediately contact my office if they face any barriers or issues that prevent them from casting an effective ballot.”

The New York Board of Elections has maintained its claim that no voters were disenfranchised, but said it was cooperating in investigations into the allegations.

New York’s Democratic primary was won by the party’s frontrunner Hillary Clinton, which blunted the momentum of rival Bernie Sanders. The primary is seen as a pivotal one to win in order to clinch the nomination.

Reports of voting irregularities and suppression have been reported across the country, with lawsuits also launched in Arizona and Ohio.

“We are also focusing our efforts on the next primary states and doing what we can to initiate some kind of intervention and legal action to protect voters,” she said.

“We were raised in a country where from our earliest schooling were taught that we lived in a democracy and the most sacred act in a democracy is the right to vote.”

“And to have our young people denied that right because of what is being called clerical errors or mistakes by the [New York] election board is a travesty.”

Jonathan Brater, of the Brennan Centre for Justice advocacy group at New York University School of Law, told Al Jazeera how the state’s “arcane” election system needs to be revamped.

“New York values may be a proxy for progressivism in our national politics – but on elections, we’re shockingly out of date.

“This week was not the first time New York voters had a hard time at the polls, and it’s long past time we widened our lens – and fixed our terribly arcane voting system, where voter disenfranchisement is too common.

“Automatic voter registration and other upgrades are the biggest piece of the answer. Instead of having to fill out a paper form to register, eligible citizens can be added to the voter rolls automatically and securely.” 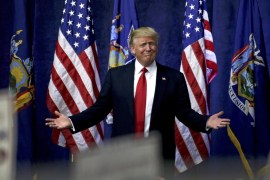 Hillary Clinton and Donald Trump move a step closer to securing the Democratic and Republican tickets for US president. 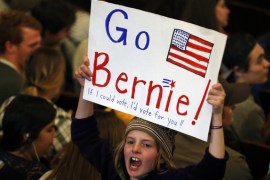 US election 2016: Cruz and Sanders win in Wisconsin