A senior ruling party official denied accusations on Friday that Turkey was rounding up and expelling en masse Syrian refugees, including children and women, on an almost daily basis.

Groups of about 100 Syrian men, women and children have been deported to Syria daily since mid-January, UK-based Amnesty International said in a report.

According to testimonies gathered, the regular forceful expulsion of Syrian refugees is an “open secret” in the region, even though it is illegal under Turkish, EU and international law, Amnesty said.

But Yasin Aktay, a senior member of parliament with the governing Justice and Development Party (AK), called the rights group’s report “a lie”.

Aktay told Al Jazeera only people suspected of having “terrorism links” were sent back to Syria, as Ankara steps up border security after a spate of deadly attacks.

“It is a lie that Turkey is sending civilians – including women and children – back to Syria. This claim is unfair to the country that is currently hosting 2.7 million Syrian refugees – who we call guests here – regardless of ethnicity.

“We are voluntarily carrying this burden,” Aktay said.

Thousands of people were deported for links to “terrorist organisations”, including with the Islamic State of Iraq and the Levant (ISIL, also known as ISIS), the Kurdish Democratic Union Party (PYD), as well as soldiers from the Syrian army, he added.

“We cannot let terrorists stay in the country. Turkey has been targeted by various people who came from Syria in recent months. Our policy is not against the Syrian people but terrorists who want to sneak into the country,” said Aktay.

IN PICTURES: Refugee crisis – bottlenecked on the Balkan route

Turkey and the EU recently agreed on a deal to cope with the massive refugee flow to Europe – an agreement that many aid organisations as well as the UN denounced as dangerous and against international law.

“In their desperation to seal their borders, EU leaders have willfully ignored the simplest of facts: Turkey is not a safe country for Syrian refugees and is getting less safe by the day,” said John Dalhuisen, Amnesty’s director for Europe and Central Asia.

Turkey, with 2.7 million Syrian refugees, is hosting the largest number of people who fled the five-year war in Syria that has killed more than 250,000 people.

Prime Minister Ahmet Davutoglu confirmed in a televised address on Thursday that implementation of the refugee deal will begin on Monday.

Aktay said the agreement was not an easy one to put into practice.

“There are technical difficulties as to how to determine refugees’ origin. It is a significant task to figure out if a person arrived in Greece from Turkey or not as they are undocumented refugees,” he said. 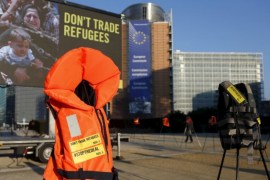 Controversial agreement means that any refugees arriving on Greek shores from Sunday would be sent back to Turkey.