Iran’s supreme leader declared the Islamic Republic must advance its missile capabilities while pursuing diplomacy to gain leverage in dealing with world powers – giving a nod to both hardline and moderate factions in the country.

“In talks we must be strong and negotiate in a way not to be deceived,” Ayatollah Ali Khamenei said on Wednesday in a statement posted on Twitter.

Khamenei said the situation calls for “both missile and talk” and the country “must use all means” to advance its interests.

Khamenei supported last year’s nuclear deal with world powers, but has since called for Iran to avoid further rapprochement with the United States and its allies, while maintaining its economic and military strength.

READ MORE: How big a threat is Iran’s missiles to regional rivals?

“If the Islamic Republic seeks negotiations but has no defensive power, it would have to back down against threats from any weak country,” he said in a separate statement posted in his website.

Khamenei’s comments came as the United Nations Security Council considers its response to the ballistic missile tests carried out by Iran’s Revolutionary Guards earlier this month.

On Wednesday, UN Secretary-General Ban Ki-moon said Iran’s missile tests caused “alarm”, and it would be up to the Security Council to decide whether new sanctions should be applied.

In an interview with Al Jazeera, Mohammad Marandi, a professor at the University of Tehran, said Iran needs to keep “a strong missile deterence” in the face of external security threats.

“Iranians know that the only reason why in the last couple of decades no one has dared to attack the country is because it has the capability to defend itself,” said Marandi.

The US and several European powers insisted the recent tests defied UN Security Council Resolution 2231 that calls on Iran not to test nuclear-capable missiles, according to a joint letter seen by Reuters news agency on Tuesday.

But Russia, a veto-wielding permanent member of the Security Council, said the tests did not violate Resolution 2231.

“You may like it or not that Iran launches ballistic missiles – but that is a different story. The truth is that in the 2231 resolution there are no such bans,” Interfax news agency cited Mikhail Ulyanov, head of Russian’s department for non-proliferation and arms control, as saying.

An official statement said it was cancelled because of security reasons.

The group – also known as Mujahedeen-e-Khalq – was listed as a terrorist organisation by the United States until 2012. Iran has also accused it of supporting former Iraqi president Saddam Hussein during the 1980-88 Iran-Iraq War. 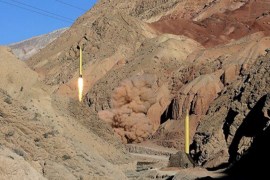 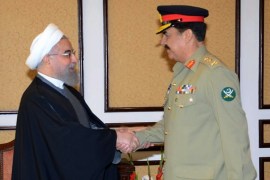 Iran to boost missile arsenal after US slaps new ban