Myanmar’s commander-in-chief of the armed forces has stressed that there is a “need” for the military to remain a political force, just days before an elected government is set to take power for the first time in 56 years.

Senior general Min Aung Hlaing, making an Armed Forces Day speech in the capital, Naypyidaw, on Sunday, reasserted the military’s belief that it is the country’s sole unifying force and protector of the constitution.

Though the military had “cooperated with the government and the people” to hold a historic general election in November, which was won by the party of former opposition leader Aung San Suu Kyi, it was not yet time to step away from the political arena, he said.

The military seized power in a 1962 coup and for decades suppressed all opposition.

But it stepped back in 2011, paving the way for a semi-civilian government to prepare for last November’s election. However, it still retains important powers.

A quarter of the parliament seats are reserved for unelected military officers, giving them an effective veto over constitutional changes, and the commander-in-chief remains in control of three key main ministries.

More than 10,000 military personnel marched in a parade marking the day in 1945 when a young nationalist leader, General Aung San, and his followers in a fledgling army turned against Japanese forces occupying their country.

Hundreds of veterans, foreign defence attaches and politicians gathered before dawn on a big parade field to watch the ceremony.

But conspicuously absent was Aung San’s daughter, National League for Democracy (NLD) leader Suu Kyi. She attended the ceremony in 2013 but has not since then.

Htin Kyaw, a loyal confidant of Suu Kyi, will take the role only because the Nobel laureate is barred from holding the position under a military-drafted constitution, which she has openly criticised.

Min Aung Hlaing defended the charter on Sunday, saying it was drafted by “coordinated efforts of intellectuals, experts from various fields and national races representatives and was ratified by a nationwide referendum”, and paved the way for the November election. 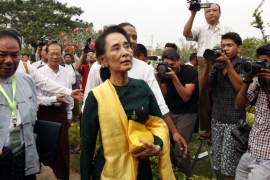 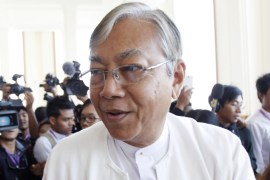 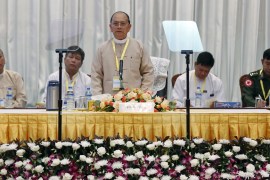