Western Europe is on high alert after attackers launched twin assaults in Belgium’s capital Brussels with bombs ripping through the airport and the underground metro line.

The Islamic State of Iraq and the Levant (ISIL, also known as ISIS) said it was responsible for the attacks that killed more than 30 people and left about 200 others wounded – many in critical condition.

Belgium’s federal prosecutor Frederic Van Leeuw said there were at least two suicide bombers involved in the airport attack, and a manhunt was on for a third caught on security video.

“This is an attack against our values, our freedom, and our democracy,” Brussels Mayor Ivan Mayeur said at a press conference. “We won’t let anyone attack our values in a cowardly way.”

“Islamic State fighters opened fire inside Zaventem Airport, before several of them detonated their explosive belts, as a martyrdom bomber detonated his explosive belt in the Maalbeek metro station,” reported the Amaq website, which is affiliated with ISIL.

The explosions struck the heart of European officialdom where NATO headquarters is based, along with the European Union, and European Commission.

Footage from the airport – the country’s largest – showed people running from the terminal building as plumes of smoke rose to the sky. Fourteen people were killed and more than 90 wounded with the casualty toll steadily rising on Tuesday.

All metro lines were shut down after the attacks. Victims were seen fleeing with blood-splattered faces at the central Maelbeek station. At least 20 people were killed in the underground train blasts.
Andrzej Nowakowski, a British citizen who works at the European Parliament, narrowly avoided being on the train that was bombed. “I was cursing because I missed the metro by two seconds, but it turns out I missed an explosion,” he told Al Jazeera.
The interior ministry raised the country’s terrorism alert to the highest level after the blasts and Brussels’ crisis centre told people: “Stay where you are”.

“At this moment we are treating 11 victims, most of them are severely injured. We are treating them for fractures, burns and deep lacerations. These lacerations are the result of glass shards from the explosions, and nails placed inside the bombs,” Decramer said.

“We are facing a difficult, challenging time and we should face up to this challenge by being united,” he said. “What we feared has happened, we were hit by blind attacks.”

A member of the European Parliament, Steven Woolfe, spoke to Al Jazeera moments after the blast at the metro station, just metres away from the European Union headquarters.

“I was sitting in my flat when a bomb exploded opposite the street. The walls shook for a second, I heard horns blasting, cars breaking, and people screaming,” Woolfe said. “Police and military were everywhere, sirens went off non-stop. They urged everyone to go indoors as rapidly as possible.”

Dave Keating and Georgia Littlefield contributed to this report from Brussels 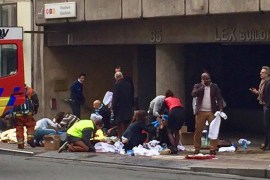