At least 26 Syrian soldiers were killed by the Islamic State of Iraq and the Levant (ISIL) group near the ancient city of Palmyra.

The deaths came during Monday’s fighting four kilometres west of Palmyra, according to the Britain-based Syrian Observatory for Human Rights, after days of advances by government forces backed by Syrian and Russian air cover against ISIL, also known as ISIS.

It was not possible to independently verify the death toll.

Syria’s state news agency SANA said the army and allied forces, backed by the Syrian air force, carried out “concentrated operations” against the group around Palmyra and the ISIL-held town of al-Qaryatayn, about 100km west.

Russian President Vladimir Putin said last week that the Syrian army would soon recapture Palmyra from ISIL, which has held the desert city for nearly a year.

“I hope that this pearl of world civilisation, or at least what’s left of it after bandits have held sway there, will be returned to the Syrian people and the entire world,” Reuters quoted him as saying.

Palmyra, called Tadmur in Arabic, has both symbolic and military value as the site of ancient Roman-era ruins – mostly destroyed by ISIL – and because of its location on a highway linking mainly government-held western Syria to the group’s eastern stronghold. 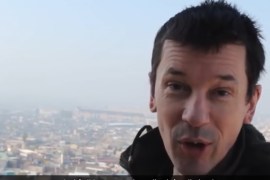 ISIL and the curious case of John Cantlie

The latest video of ISIL hostage John Cantlie is a reminder of how far the group is willing to go to get publicity. 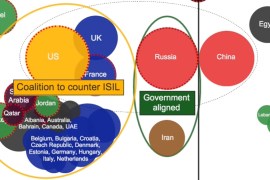 Syria’s allies and enemies after five years of war

Amid shifting military strategies, the people of Syria have paid the heaviest price.