US presidential hopeful Donald Trump has doubled down on previous comments about Islam, saying there is “tremendous hatred” towards Americans from Muslims.

Asked on Thursday during a televised debate in Miami, Florida, if he meant all Muslims, the frontrunner to be the Republican party nominee for president said: “I mean a lot of them”.

Trump once again invoked the September 11, 2001, attacks in New York and Washington and added there is “something going on”, without elaborating.

Marco Rubio, another candidate for the nomination, and Trump were tangling over what the US stance towards followers of Islam should be, with Trump telling the Florida senator: “You can say what you want. You can be politically correct if you want. We have a serious problem with hate”.

The Florida senator noted that there were grave markers in Arlington National Cemetery that have “crescent moons,” which connote the Muslim faith.

He said “they love America”, and that the US will need healthy relations with Muslim nations to defeat the Islamic State of Iraq and the Levant (ISIL, also known as ISIS) group.

Trump, who has voiced scepticism about US military involvement abroad in the past, for the first time said America’s effort against ISIL might need between 20,000 and 30,000 US troops, a number similar to what some Republican hawks have proposed.

Earlier in the campaign, Trump called for a “total and complete” block on non-US Muslims entering the US.

A statement from Trump’s campaign team in December said the halt on Muslims entering the country should remain in place “until our country’s representatives can figure out what is going on”.

Trump also defended his approach to the Israeli-Palestinian conflict, saying that while “there’s nobody that’s more pro-Israel than I am”, in order to make a deal with Palestine he would have to make them believe he was somewhat neutral.

Trump said striking a peace deal with Israel and Palestine would be “maybe the toughest negotiation of all time”.

Texas Senator Ted Cruz, who has been engaging with Trump more than Rubio or Ohio Governor John Kasich, said it would be wrong to be neutral toward Palestine.

In contrast to previous presidential debates, the candidates largely managed to present their arguments without vitriol.

Trump shook his head and declared at one point: “I can’t believe how civil it’s been up here.”

The businessman, though, clearly was intent on projecting a less bombastic – and more presidential – image.

His closing message: “Be smart and unify.”

“We’re all in this together,” he said early on, sounding more like a conciliator than a provocateur as he strived to unify the party behind his candidacy. “We’re going to come up with solutions. We’re going to find the answer to things.”

Trump’s rivals, in a desperate scramble to halt his march to the nomination, gradually ramped up their criticism as the night wore on.

Rubio’s overarching message: “I know that a lot of people find appeal in the things Donald says. The problem is presidents can’t just say anything they want because it has consequences around the world.”

Florida is the biggest prize in a five-state round of voting on Tuesday, and all 99 of the state’s delegates will go to the winner.

In all, 367 Republican delegates will be at stake, with voting also occurring in Illinois, Missouri, North Carolina, Ohio and the Northern Mariana Islands. 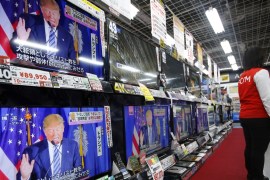 Trump and the post-American Asia

Trump and his legions of supporters have made a mockery of US claims to exceptionalism and global leadership. 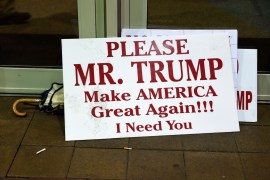 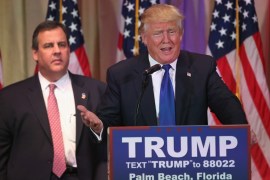