South African President Jacob Zuma has survived a second no-confidence motion against him in less than a year, held over what the opposition deemed his reckless handling of the economy.

The vote on Tuesday was won on the support of ruling African National Congress politicians, who control almost two thirds of the assembly.

The no-confidence vote was set up by South Africa’s opposition party, Democratic Alliance (DA), which blames Zuma for the country’s economic failures after he fired Finance Minister Nhlanhla Nene in December.

Before the vote, Democratic Alliance leader Mmusi Maimane said on the party website: “South Africans demand that Jacob Zuma be taken to task for his reckless handling of our economy, and his sending South Africa into financial crisis.”

In parliament on Tuesday, Mabine Seabe, spokesman for Maimane, said: “The biggest sell-out in our country is none other than the president himself.”

However, the ruling ANC dismissed the protest on its Twitter account calling it, “the frivolous antics of the DA cloaked as democracy”.

In December, Zuma sacked two finance ministers within days, a move which resulted in a market sell-out.

The DA’s Seabe said that around 8.2 million people are jobless in South Africa, with the unemployment rate at 25 percent.

Treasury forecasts last week suggested that the economy may expand by only 0.9 percent in 2016, the lowest rate since South Africa emerged from recession in 2009.

The opposition is also calling for the reinstatement of corruption charges against Zuma, which were dropped in 2009 shortly before he became president.

Seabe mentioned some of his most notorious corruption scandals during his speech on Tuesday.

The DA alleges that the corruption cases were dropped due to Zuma’s interefence with the judiciary.

“Jacob Zuma sold out when he manipulated the National Prosecuting Authority to drop charges on 783 counts of corruption, bribery, money laundering and racketeering against him,” Seabe said.

The first vote of no confidence was held in March 2015.

Zuma will complete the second term in 2019 and is not eligible to run for president again.

However, if the opposition continues to press for corruption charges to be reinstated, the party could replace him before the vote. 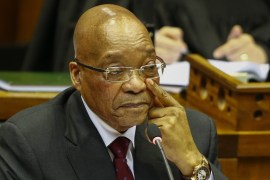 Constitutional Court to consider whether the president should return funds used on $23m private renovation. 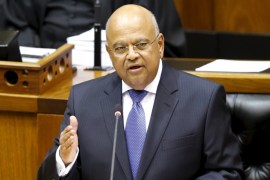