Refugees from Burundi, who fled violence in their country to neighbouring Tanzania, have accused their government of sending armed men into a UN-run refugee camp to hunt down opposition supporters.

Several refugees have told Al Jazeera that they fear for their lives and that there is no adequate security in the camps in Tanzania to protect them.

“The camp is currently not safe. We live in fear of Burundian government militia [members] who are in the camp,” one refugee said in a phone interview, after Al Jazeera visited a camp in north west Tanzania.

The Burundian government has denied the allegations.

More than 200,000 people have fled Burundi since the African country slipped into a violent political crisis, and half of the refugees have sought shelter in Tanzania.

Al Jazeera visited the Nduta camp, where over 40,000 refugees are currently staying.

But the team was only allowed to interview refugees who had been screened by officials from the UN refugee agency, the UNHCR. The UN said the screening was for the protection of refugees.

However, other refugees in the camp who later spoke to Al Jazeera by phone said Burundi had dispatched agents who carried out attempted killings and abductions.

One man told Al Jazeera that he narrowly escaped an abduction.

“Some of our group were tied up. We were loaded onto a truck and driven away. My friend and I jumped off and ran away to the Tanzanian border, where we met more government militia. They killed my friend but I escaped over the border,” he said.

Several other refugees also said dozens of Burundians had left the camp in November in the belief they would join an armed rebel group back in Burundi.

The refugees said they later learned it was a trap set by government-backed armed groups, and that most members of the group were killed, according to reports from people inside Burundi.

The refugees said they reported the incidents to camp officials, but most of the government agents are still at large.

“I don’t believe that there are militia operating in Tanzania as we have heard [from] UNHCR authorities,” he said.

“In any case, anything beyond the borders of Burundi is not the responsibility of the government of Burundi.”

The Tanzanian government, for its part, said it was not aware of the allegations, but that it would do whatever it could to secure the camps.

“The government has been very strict, and whenever we have spotted any kind of activity that is trying to suggest there is any kind of recruitment, we have actually taken serious measures,” Harrison Mseke, Tanzanian director of refugees, told Al Jazeera.

“Only last week some refugees were actually apprehended and they were taken before the courts and charged on issues that were associated.”

A leaked UN report has accused the neighbouring Rwandan government of recruiting and training Burundian refugees in a camp in Rwanda to fight against the Burundian government.

Rwanda has denied the allegations.

– With reporting from Malcolm Webb in Tanzania 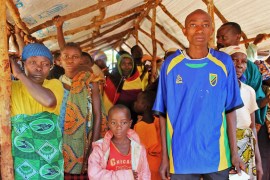 Burundi refugees: A life of displacement and despair