Kuala Lumpur – Malaysia’s health minister has given warning that the country is in the midst of an obesity epidemic, with almost half the country overweight or obese.

New figures – published on Wednesday – show that almost 18 percent of the country, or more than five million people, can be classed as obese. A further 30 percent are overweight.

Like so much of the developed world, waistlines have been expanding, but it is the rate at which the kilos have been going on that is alarming the government.

Twenty years ago only 4.4 percent of Malaysians were considered obese. A decade later that had jumped to 14 percent.

“We are very multicultural and we have a great variety of foods and the culture of eating is part and parcel of daily life,” he said.

“The type of food we eat is very high-calorie, and we have to concede we eat more food than we need.”

INSIDE STORY: Can the global march of obesity be stopped?

Many traditional Malaysian dishes are enriched with high-calorie ingredients such as palm and coconut oil.

A favourite Malaysian sweet – kuih – is made from glutinous rice, sugar and coconut oil.

Obesity is normally gauged on a percentage scale of the Body Mass Index or BMI. That is calculated by a person’s weight in kilos divided by their height in metres squared.

E-Siong Tee, the president of the Malaysia Nutrition Society, says the key to getting Malaysians to slim down is through education.

“I think the solution must be in educating the young people now for example primary school children,” he says.

“If we educate the 10-year-olds and the 11-year-olds now, they will become adults later on and 20 years later they will be healthier adults. Less obese, less overweight and healthier Malaysians.”

For his part, Subramaniam says that in addition to the amount of food being consumed, people are leading a more sedentary lifestyle and their jobs do not involve any activity.

People need to become more calorie-conscious about the foods they put in their mouths.

Nor does the urban lifestyle in Malaysia encourage activity.

Town planning is often focused on the car and more roads than pedestrian areas. People here prefer to drive than use their own two feet. 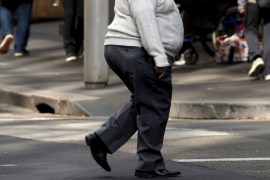 Can the global march of obesity be stopped?

Experts predict a billion people will be obese by 2025, but stopping the crisis may take more than a change in diets. 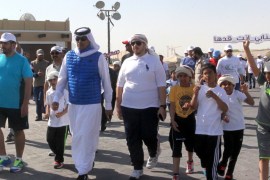 Finding a ‘cure’ for obesity

Researchers in the UK, US and Qatar have made breakthroughs in the science of weight loss.