Donald Trump, a front runner in the US presidential race, has said it is “disgraceful” of a religious leader to question his Christian faith after Pope Francis made the suggestion while criticising his anti-immigration stance.

In a dialogue with reporters on Thursday on a flight to Vatican City at the end of a five-day visit to Mexico, Francis said, in a reference to Trump, that “a person who thinks only about building walls … and not building bridges, is not a Christian”.

Trump, who is the leading Republican candidate in national opinion polls, has been at the centre of a number of controversies, including one over his pledge to build a wall between the US and Mexico to keep out undocumented immigrants if elected president.

He has also announced plans to deport millions of undocumented immigrants.

“Vote, don’t vote, I won’t meddle. But I simply say, if he says these things, this man is not a Christian,” Francis said in a response to a question about Trump’s anti-immigration stance.

In a statement posted on Facebook on Thursday, Trump said: “No leader, especially a religious leader, should have the right to question another man’s religion or faith.

“I am proud to be a Christian and as president I will not allow Christianity to be consistently attacked and weakened.”

Trump also said that in the hypothetical case of an attack on the Vatican by the Islamic State of Iraq and the Levant (ISIL), the armed group which has seized territory in Iraq and Syria, Francis “would have only wished and prayed that Donald Trump would have been president”.

“If and when the Vatican is attacked by ISIS, which as everyone knows is ISIS’s ultimate trophy, I can promise you that the pope would have only wished and prayed that Donald Trump would have been president because this would not have happened,” Trump said.

“ISIS would have been eradicated, unlike what is happening now with our all talk, no action politicians.”

Al Jazeera’s Kimberly Halkett, reporting from Washington DC, said whether the row would have a significant effect on voters’ sentiments in the upcoming primaries is open to question.

“Even though there is a very large number of evalengical or devout Christian voters in South Carolina and Nevada … the people who seem to be attracted to Donald Trump as a potential president … also care about foreign policy and economic issues,” she said. 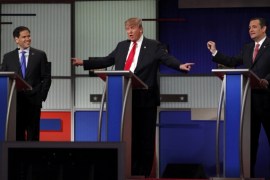 A look at angriest exchanges between presidential candidates in latest debate. 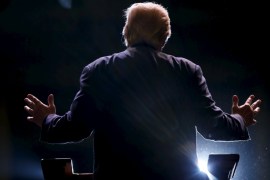 What does Donald Trump stand for?

Leading Republican presidential contender refuses to budge on his controversial comments to bar Muslims from the US. 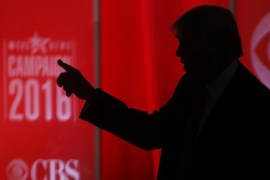 Trump at his angriest, antagonistic worst

The remaining six candidates in the race faced off in Greenville, South Carolina, one week before the primary there.