Temperatures have again broken records in California, where a lingering heatwave has made February feel like a summer month.

The temperature in downtown Los Angeles hit 32C again on Tuesday, the second time this month. The first time was on February 8.

The city’s record high for February is 35C, but the average is only 21C. February has been a warm month; since February 6, every day but one has exceeded the average.

Monthly records are less likely to be equalled, let alone broken, than daily records, but it is a surprise to see that two dozen cities either tied or broke their daily records on Tuesday.

The airport in San Francisco recorded 23C, again. Rather like southern California, the centre of the state has had a warm month so far. On every day since February 5, San Francisco has exceeded the average of 16C by several degrees.

New Mexico and Arizona have been sharing in the warm spell.

In Phoenix, Arizona, the fire department went so far as to issue safety tips associated with hot weather. Some of the tips included not leaving children or pets unattended in vehicles, staying hydrated, and scheduling outdoor activities during the cooler hours of the morning and evening.

Phoenix hit 31C on Friday, Saturday and Tuesday. If the city reaches 32C before February 24, it’ll be the earliest time in a calendar year that mark has been reached. Albuquerque, though not showing such high figures, is still running at nearly 10 degrees above average.

Another Pacific storm will change things for a few days in California; San Francisco is already clouding up ahead of rain. But the heat is likely to rebuild after the coming weekend. 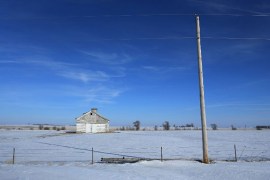 Heavy snow and strong winds cause chaos across the US Rockies and Great Plains. 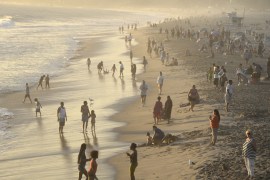 As temperatures around Los Angeles approach record level, the strain on the power network proves too much.