The death toll from a blaze that gutted a California warehouse during a rave party has climbed to 30 and is expected to rise, officials said.

The fire erupted at about 2330 local time on Friday (0730 GMT on Saturday) during the party featuring electronic dance music that dozens of people attended.

We have confirmed that the count of the deceased at 30. That is an astronomical number

Authorities said they did not suspect arson, but investigators want to find out if the building, which was partitioned into artists’ studios, had a history of code violations.

“We have confirmed that the count of the deceased at 30. That is an astronomical number,” Sergeant Ray Kelly, of the Alameda County Sheriff’s Department, told reporters.

Authorities had only searched a small part of the two-story building.

“We are still not done … they are working and pulling this building apart and dissecting it. And so we’re really starting to get deeper into the building. As we do that, we continue to find more victims. In regards to the amount of people that are still missing, yes, it’s a significant number.”

The recovery operation had been delayed for hours until workers could enter safely. The roof had collapsed on to the second floor and in some spots, the second storey had fallen on to the first.

Firefighters have gone through the building searching through the debris, “bucket by bucket”, according to battalion chief at the Oakland Fire Department Melinda Drayton.

“It was quiet, it was heartbreaking,” she said, referring to the search. “This will be a long and arduous process.”

The warehouse, which served as a base for the Ghost Ship Artists’ Collective, was one of many converted lofts in the city’s Fruitvale district, a mostly Latino area where rents are generally lower than in the rest of Oakland.

“It was too hot, too much smoke, I had to get out of there,” Bob Mule, a photographer and artist who lives in the building and suffered minor burns, told the East Bay Times.

“I literally felt my skin peeling and my lungs being suffocated by smoke. I couldn’t get the fire extinguisher to work.”

Many of the victims were believed to be in their 20s and 30s, and the fire sent ripples of anxiety through the Bay Area’s large art and music community.

“I am still in disbelief, but I hope my friends who were in the Oakland Ghost Ship fire and are still unaccounted for are OK,” Joanna Blanche Lioce, a bartender at Bottom of the Hill, a popular music venue in San Francisco, wrote on Facebook. 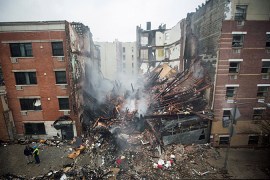 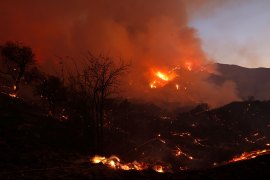 Hundreds evacuate their homes as fast-expanding fire tears through the drought-stricken mountains northwest of L.A 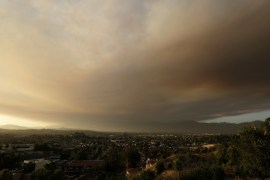