Russia has pledged “adequate reprisals” over US sanctions and accused Washington of trying to destroy ties by making “unfounded” allegations of interference in the US election.

The United States wants to “definitively destroy US-Russia relations which have already reached a low,” Kremlin spokesman Dmitry Peskov said on Thursday, adding that Russia will “react in an adequate manner based on the principles of reciprocity”.

Washington announced a series of measures against Russia, including tough sanctions on Russia’s top two intelligence agencies, the expulsion of 35 diplomats and a decision to shut down two Russian compounds in the US.

Accusations of #Russia interfering with #US presidential elections are absolutely groundless

“We categorically reject the unfounded assertions and accusations made about Russia,” Peskov said, according to the Ria Novosti news agency.

“The American sanctions against Russia and the expulsion of 35 diplomats in 72 hours are proof of a real paranoia,” said Leonid Slutsky, the chairman of the state duma committee on international affairs.

“They are once again taking very aggressive measures against our country,” he said, according to Ria Novosti.

The US intelligence community has concluded that a hack-and-release of Democratic Party and Clinton staff emails was designed to put Trump – a politician with no diplomatic experience who has praised Putin – into the Oval Office.

The US government is also declassifying technical information on Russian cyber activity to help companies defend against future attacks.

Richard Weitz, a fellow at the Hudson Institute in Washington DC, told Al Jazeera: “The Kremlin needs to calculate, and it’s in a bit of a dilemma here, how much do they want to show they’re tough and respond at the risk of harming relations with a new US administration that’s coming to power in a few weeks, which clearly wants to improve relations with Russia.”

The White House says it will provide a more detailed briefing of its claims to Congress, said Al Jazeera’s Kimberly Halkett, reporting from Washington, DC.

“The timing of that report is curious, roughly three weeks before Trump is set to be sworn into office,” she said.

“It’s a move that may have been designed to put Donald Trump in a difficult spot, forcing him as one of his first acts of office to decide whether to lift the Russian sanctions that many members of his own Republican Party support, while at the same time putting at risk the Russian relationship many allege may have helped him win the White House,” said Halkett.

Speaking after the announcement of sanctions, Trump – currently on holiday in Florida – said that it was time for the US “to move on”.

However, the incoming president also vowed to meet intelligence leaders to learn more.

Lilit Gevorgyan, Russia analyst with IHS Global Insight, told Al Jazeera: “What we’re seeing is a mismatch between what the outgoing Obama administration is saying, and what the newly elected president is saying about Russia … Yes, perhaps Russia is celebrating a victory, but I believe that it’s a short-term victory. What is worrying is what’s coming next.” 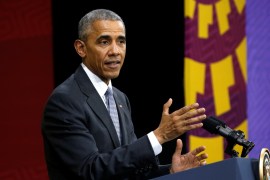 Obama defends expulsions, calling action “a necessary and appropriate response to efforts to harm US interests”. 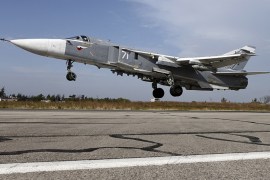 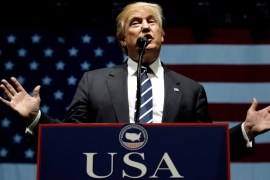