India’s ruling Bharatiya Janata Party ran an online campaign against Bollywood star Aamir Khan for his comments on growing intolerance in the country, according to a former volunteer with the BJP’s IT Cell.

Khan had to face the wrath of far-right Hindu groups for his comments late last year that were seen as critical of the government of Narendra Modi, who became prime minister after leading the BJP to a massive election victory in 2014.

Khan, 51, was later dropped as brand ambassador by Snapdeal, an Indian e-commerce firm.

Khan is one of Bollywood’s biggest stars and his current film, Dangal, has been running to packed houses in cinemas across the country.

Sadhavi Khosla, who volunteered for the BJP’s social media team between 2013 and 2015, said that “malicious and sexist” campaigns were run online against opponents and prominent journalists.

“I have submitted proof of [the then] BJP IT Cell chief Arvind Gupta’s message sent to me personally to boycott Snapdeal because Aamir Khan was its brand ambassador,” she told Al Jazeera.

“When a message from IT Cell comes from the party, it automatically becomes official party line.”

Khosla’s account is being published in a book entitled I Am A Troll, written by journalist Swati Chaturvedi.

Khan was also dropped as the face of India’s tourism for the “Incredible India” campaign, but the government denied that his comments on the issue of growing intolerance were the reason.

However, Manohar Parrikar, India’s defence minister and a senior BJP leader, suggested at a public function later that Khan was taught a lesson.

Khosla says that the two Khans – Aamir Khan and Shah Rukh Khan – part of the triumvirate of Khans that also includes Salman Khan – were targeted for “whatever comments they made”.

“For 25 years, I grew up watching their movies. For me they are my superstars, they are the biggest Bollywood stars,” she said.

“Suddenly after Modi came to power I realised that they are being targeted as Muslim actors.”

Gupta has dismissed Khosla’s allegations as “unsubstantiated” and told the Indian Express newspaper that the BJP never “encouraged trolling”.

He denied that he “directly supervises social media activities since 2015 when the party structure was reorganised”.

Amit Malviya, the current BJP IT Cell chief, also denied that the party “promoted such activities”.

“Arvind [Gupta] is a valued colleague and his words are final. We have proper guidelines on the party website about these matters,” Malviya told Al Jazeera.

BJP is a pioneer among the political parties in using the social media for political campaigning, and Modi was one of the earliest politicians to adopt online tools when he was the chief minister of Gujarat state.

During the 2014 elections, the party employed thousands of volunteers spread across the country as well as overseas on top of its more than 1,000 paid staff based in New Delhi.

On the allegations that anti-minorities messages were being pushed by supporters of BJP such as the Hindu Defence League (HDL), Malviya said: “You can speak to their spokespersons … I cannot speak for them.”

The Indian government has been accused of ignoring the army of trolls who zealously defend it and often engage in personalised attacks against journalists and political opponents.

Modi has drawn criticism for personally meeting many of the so-called bloggers and social media volunteers, who have been accused of issuing threats of rape to activists and journalists, particularly women, on twitter.

India has a law against online hate messages but instead of acting against abusive trolls, governments in recent years have used it as a weapon against dissent.

Senior journalists such as Barkha Dutt and Sagarika Ghosh have been at the receiving end of the trolls that Indian media refers to as “bhakts” who push ultra-nationalistic narratives online.

“BJP runs a massive social media army. If you look at their entire campaign, it was based on fabricated lies. So you keep spinning the lies until the point it becomes the truth,” Khosla said.

Khosla says she supported Modi in the 2014 parliamentary elections on the promise of creating jobs and improving living standards.

“After six to eight months of his coming to power, I started feeling suffocated and disenchanted, and this was not the government and the leader that I wanted.”

“But by the mid-2015, I had decided that it was mistake to support this party,” said Khosla, adding that she stopped volunteering for the BJP at the end of last year.

Critics say Modi’s silence has emboldened far-right Hindu groups, who have been running vigilante campaigns such as “Save cow” and “Love Jihad”.

In September last year, a Muslim man near the capital, New Delhi, was bludgeoned to death by cow vigilantes over rumours that he ate beef. Later it turned out that he had not eaten beef.

“This was pretty shocking for me. I don’t eat meat neither does my family, but I don’t support killing a human being for eating beef,” said Khosla.

“That is not the kind of India I had dreamed of.” 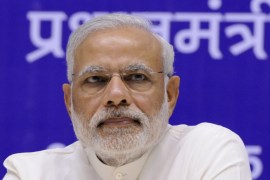 Nidhi Dutt looks at whether there is substance to Prime Minister Narendra Modi’s polished media operation. 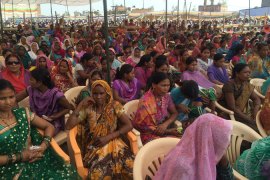 Manmohan Singh tells rally that a BJP election victory would be detrimental to India’s “secular personality”.