A powerful typhoon has killed at least four people in the Philippines before passing over the capital, Manila.

Typhoon Nock-Ten, known locally as Nina, made landfall on the eastern island province of Catanduanes on Christmas Day, moved westward on Monday, packing winds of up to 240 kilometres per hour and gusts of 290km/h, government forecasters said.

Tens of thousands of villagers were displaced as the typhoon cut power to five provinces at the height of the storm.

A farmer died in Quezon province and three other villagers, including a couple, were swept away by a flash flood in Albay province.

Officials in Albay, where more than 150,000 villagers were displaced by the typhoon, declared a “state of calamity” to allow faster disbursement of emergency funds.

More than 218,000 people had fled their homes, while 48 domestic and international flights were cancelled, the civil defence office said, as the unusually late typhoon marred Christmas celebrations.

Dragging its way over the heavily populated provinces of Batangas and Cavite, Nock-Ten was expected to exit over the South China Sea later on Monday.

The bustling metropolis of Manila, home to about 13 million people, was eerily quiet the day after Christmas with the usual holiday revellers staying indoors as heavy rains and winds lashed the city.

The civil defence office had warned that the capital could suffer “heavy to intense rains, flash floods and severe winds”, with rescue boats ready to be deployed in case the rivers overflow.

An average of 20 storms and typhoons strike the Philippines each year, killing hundreds of people.

Mammoth tsunami-like waves devastated the city of Tacloban and nearby areas when super typhoon Haiyan struck the central Philippines in November 2013, leaving 7,350 people dead or missing. 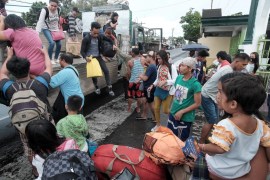 Officials warned 2.5m high waves and landslides as evacuation under way ahead of Nock-Ten’s arrival. 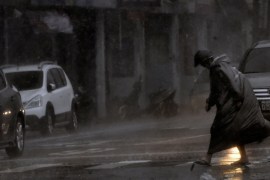