A Russian military plane with 92 people on board, including members of a famed army choir, has crashed into the Black Sea shortly after taking off, the Russian defence ministry has said.

There was no sign of survivors, the defence ministry said on Sunday, as President Vladimir Putin announced a national day of mourning.

The Tu-154 plane had departed from the southern Russian city of Adler on Sunday morning and was heading towards Latakia in Syria.

Magomed Tolboyev, a decorated Russian test pilot, said the circumstances of the crash indicated that all on board had died.

“There is no chance to survive in such a situation,” he said, according to the Interfax news agency. “The plane gets instantly blown into pieces.”

A list of passengers and crew published by the ministry showed that 64 members of the renowned Alexandrov Ensemble, the army’s official choir, and its conductor Valery Khalilov were on board the plane.

Members of the choir were travelling to Syria to celebrate the New Year with Russian troops.

The defence ministry said a widely revered Russian charity doctor was also on board the plane, in addition to nine journalists, a Russian army general and five colonels.

“The site of the Tu-154 plane crash has been identified,” news agencies quoted the ministry as saying.

The Alexandrov Ensemble was due to perform at the Khmeimim airbase, Russia’s main base of operations for its military campaign in support of the Syrian government.

Russia has been supporting its longtime ally, Syria, with a bombing campaign against rebel groups for more than a year.

Syrian president Bashar al-Assad said on Sunday he was “saddened” by the crash.

In a condolence message sent to President Putin, Assad said the two countries were partners in the “fight to lay the foundations of stability, security and peace” in Syria.

Viktor Ozerov, head of Russia’s defence affairs committee at the upper house of Russian parliament, said in remarks carried by the state news agency RIA Novosti that he “totally excludes terrorism” as a possible cause of the crash.

But Russia’s transport minister Maxim Sokolov said an “entire spectrum” of possible reasons is being considered.

Major-General Igor Konashenkov, a ministry spokesman, said fragments of the plane had been found at a depth of about 70 metres in the Black Sea about 1.5 km off the coast near the city of Sochi.

“The search operation is continuing,” said Konashenkov. “Four ships, five helicopters and a drone are working in the area,” he said.

Other news agencies reported that parts of the plane and undercarriage, and also an oil slick were found over an area covering several kilometres in the Black Sea.

“Reports here in Moscow are saying that the passengers included journalists and military personnel, in addition to members of the famous Alexandrov Ensemble,” she said.

“Russian President Vladimir Putin has ordered Prime Minister Dmitry Medvedev to form and head a state commission to investigative the crash of the Tu-154 plane in Sochi,” the Kremlin said in a statement.

The Tu-154 is a Soviet-designed three-engine airliner.

In April 2010, many high-ranking Polish officials, including then president Lech Kaczynski, were killed when a Tu-154 airliner went down in thick fog while approaching the Smolensk airport in western Russia. 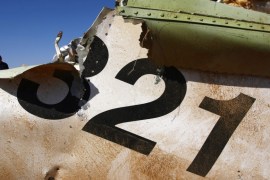 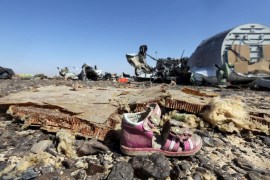 Investigators say no indication of “terrorist act” in Russian plane crash that killed all 224 onboard.