Rukban camp – Regular aid services for up to 85,000 refugees stuck in a barren wasteland between the Syrian and Jordanian border – an area known as “the berm” – are finally back up and running, according to the United Nations.

But questions remain over several aspects of the new plan for Rukban camp, with rights organisations saying that it continues to fall short of international humanitarian standards.

“Despite the immense challenges posed by the harsh and remote environment, distribution of humanitarian assistance, including a monthly food ration and winter supplies, has been made to 8,404 households, meeting the needs of an estimated 31,094 people in Rukban and Hadalat,” David McLachlan-Karr, the UN’s interim humanitarian coordinator for Jordan, told Al Jazeera. Hadalat is a smaller settlement north of the main one at Rukban.

“The conditions at the berm are dire, worsened further by the advent of the harsh winter weather,” he added. “The UN’s partners are working as hard as possible to expedite the distribution of assistance to all of those in need.”

The conditions at Rukban, a remote and arid part of the desert in northeastern Jordan, have been troubling for a while, with no toilets, running water or electricity since the informal camp sprang up more than a year ago. Nearly 95 percent of households do not have enough food, according to a needs assessment conducted by World Vision International, and some people are reported to have sold their tents just to buy something to eat.

Dwellings are makeshift and unable to withstand the increasingly harsh, cold weather conditions. Medical care has been almost non-existent, and only five to six litres of water for each person is available every day – about a third of the international standard. Around three-quarters of the residents are women and children.

Things deteriorated significantly after the Jordanian army sealed off the entire Syrian border, following a deadly car bombing carried out by the Islamic State of Iraq and the Levant (ISIL, also known as ISIS) at Rukban in June, with just one major aid delivery all summer: a month’s worth of food, hygiene kits and shelter materials dropped over the berm by crane in early August.

One of the primary reasons people are clustered along the Jordanian border is because they feel safe there, both from Russian bombing and from ISIS. So encouraging them to move is a problem.

In a sign of the high level of security in the area, even the trickle of donations from smaller local organisations have been subject to heavy restrictions. Helping Refugees in Jordan, a group of local volunteers, sent 1,400 packages of food essentials to Rukban before large-scale aid resumed, but they were delayed for weeks while the Jordanian army checked every single box.

UN aid is now being funnelled through a new distribution point around six kilometres west of the current one, which is situated near a Jordanian military base, and further back towards Syria. As UN staff cannot cross the Jordanian border to distribute aid, that will be done by contractors. Water will be delivered via a specially built pipeline, although that is not expected to be finished until the end of the year. The aim appears to be to encourage the refugees to move from their current location in order to give the Jordanian army more breathing room in the event of another attack.

“It’s good that there’s a resumption of aid, as the refugees there are in desperate shape,” Human Rights Watch (HRW) researcher Adam Coogle told Al Jazeera.

However, he added that from HRW’s perspective, the new distribution point was very clearly inside Syria, and that incentivising refugees to relocate there was troubling.

“We would consider it refoulement,” he said, referring to the legal term for forcing refugees to return to a country where they might be persecuted – the prohibition of which is a cornerstone of international refugee law. “One of the primary reasons people are clustered along the Jordanian border is because they feel safe there, both from Russian bombing and from ISIS. So encouraging them to move is a problem.”

Amnesty International has also criticised the plan, calling it little more than a band-aid.

“While the UN plan for aid distribution will bring short-term relief for the population, it is not a long-term solution,” Khairunissa Dhala, a refugee researcher at Amnesty, told Al Jazeera. “The security threats that Jordan fears are the same ones feared by thousands of refugees stranded at the berm. They are also struggling to survive and in desperate need of food aid and life-saving medical treatment. The Jordanian authorities, with the help of the international community, must grant sanctuary to refugees fleeing the bloodshed in Syria.”

This seems unlikely, however. Early last month, government spokesman and information minister Mohamed Momani reiterated that Jordan would not compromise its security by reopening the border at Rukban, describing part of the camp as an ISIL “enclave”.

There are also ongoing concerns about how to provide much-needed mass medical care for the large population at the berm, particularly as winter descends. A new service facility on the Jordanian side of the border will include a clinic providing primary, maternity and newborn healthcare, but patients must be screened by the Jordanian security forces before they can cross the border to access it.

It remains unclear when, or if, international aid workers will be allowed across the berm. Some aid organisations are understood to be planning to provide medicine through contractors or proxies, but Doctors without Borders, known by its French initials MSF, says this is hugely problematic due to the risk of partisanship.

“What we support is direct access of qualified medical staff from any humanitarian organisation … that can provide quality and independent services to the population,” Luiz Eguilez, the head of the mission for MSF – Netherlands in Jordan, told Al Jazeera. “You cannot deliver healthcare with cranes or contractors. So we are negotiating with the army to have direct access inside.”

MSF’s work in Rukban prior to the border closure gives a sense of how widespread the health issues are in the camp, particularly with easily preventable diseases. In the month before the June 21 bombing, Eguilez’s team saw 3,500 patients; a third had diarrhoea, and there were many cases of skin diseases and respiratory infections due to the lack of sanitation and dryness in the area. Nearly a quarter of households at Rukban include one or more pregnant women, according to World Vision.

“Based on what we saw … plus four months of no healthcare, we can say the health situation there is quite bad now,” said Eguilez.

“Through unverified sources [in recent months] we have also seen cases of jaundice … and a certain number of malnutrition cases,” he added. “With only one delivery of food, this is bound to have got worse.” 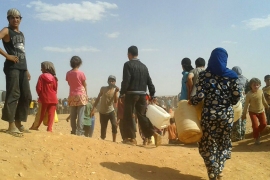 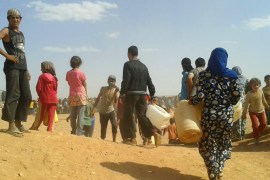 Nearly 70,000 Syrians, mostly women and children, are being denied food and water by Jordanian authorities.