Around 100 people are missing and feared dead after two shipwrecks off Italy, raising the estimated death toll among refugees on the Mediterranean this year to at least 5,000 – a new annual record, UN agencies said on Friday.

Deaths linked to Mediterranean crossings by refugees have spiked in 2016, as arrivals to Europe fell.

Last year, over a million people crossed the sea – mostly from Turkey to Greece – with 3,771 deaths recorded. But this year, about 360,000 people have successfully crossed, most between Libya and Italy, with far more deadly results.

On average, 14 people have died every single day this year in the Mediterranean

“The latest information we have is that yesterday, in two incidents, as many as 100 people lost their lives,” said William Spindler, spokesman for the UN refugee agency, UNHCR.

Citing survivors’ accounts, Joel Millman, of the International Organization for Migration, said that at least 57 people were feared dead following the capsizing on Thursday of a rubber dinghy carrying between 120 and 140 people.

He said eight bodies had been recovered in that area. Another 40 people were feared dead from another dinghy carrying about 120 people.

Millman said he did not immediately have further details about the possible causes of the shipwrecks.

UNHCR said the Italian coastguard carried out a total of four rescue operations in the central Mediterranean on Thursday, including the rescue of about 175 people from another dinghy and a wooden boat.

The coastguard helped the rescued survivors to disembark at the western Sicilian town of Trapani.

Among possible causes for the increase in deaths on the Mediterranean this year, the refugee agency cited a worsening quality of vessels used, as well as the tactics adopted by smugglers to prevent detection by authorities – such as sending many boats out at the same time, which makes the work of rescuers harder. 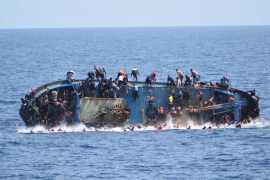 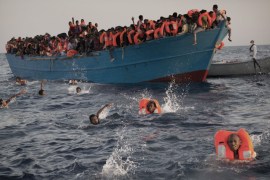 Coastguard says refugees packed aboard a number of dinghies saved in 40 different operations in one day. 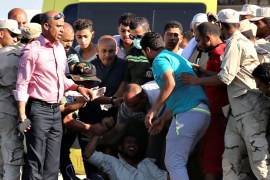 Officials say bodies of 162 people have been pulled from the Mediterranean, amid fears death toll could rise further.