Two hijackers of a Libyan aircraft with 118 people on board surrendered to authorities on the island of Malta hours after claiming to have hand grenades and threatening to blow the plane up unless their demands were met.

Maltese prime minister Joseph Muscat said on Twitter that all passengers and crew had been safely released by Friday evening.

The hijackers, Muscat said, had “surrendered” and been “searched and taken [into] custody”.

The prime minister said the hijackers had one pistol and one hand grenade on them, and a second handgun was later found on the plane.

In a later statement, the government said initial forensic investigations showed that the weapons used by the hijackers were identical “replica” weapons – imitation weapons that may not actually fire, but are difficult to distinguish visually from real guns.

Siala, from Libya’s internationally backed Government of National Accord, said the hijackers also said they want to set up a pro-Gaddafi political party.

The last major hijacking on the tiny Mediterranean island of Malta was in 1985, when Palestinians took over an EgyptAir plane. Egyptian commandos stormed the aircraft and dozens of people were killed.

Malta-based journalist Karl Stagno-Navarra said one of the hijackers had appeared at the door of the plane waving a large green flag – similar to the old Libyan flag under Gaddafi’s rule. After a few moments, he put the flag down and returned inside.

Malta is about 300km north of the Libyan coast.

Prime Minister Muscat also tweeted that the passengers on board the plane included 82 men, 28 women and one infant.

“The pilot tried very hard to have them land at the correct destination, but they refused.” 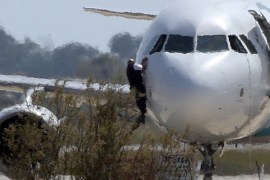 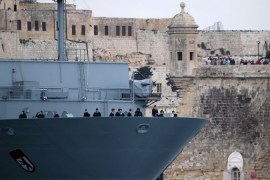