Thousands of civilians and fighters are still waiting to be evacuated from the last rebel bastion in Aleppo city but difficulties including harsh weather are complicating the final phase of the operation, a rebel spokesman said.

On Wednesday, bad weather and the poor condition of some cars appeared to have slowed the operation which has already brought out thousands of others since late last week.

Vehicles were still streaming out of eastern Aleppo on Thursday morning after an evacuation overnight monitored by the United Nations, a UN official in Syria said.

In addition to the obstacles disrupting the departure of the last group, rebels and Iranian-backed militias were blaming the other for the delays.

Ahmed Kara Ali, the spokesman for the rebel group Ahrar al-Sham, which is involved in the negotiations, told Reuters news agency that “large numbers” were left but that it was difficult to estimate how many remained, beyond it being in the thousands.

“The evacuation is still ongoing, monitors are still on site. About 300 private vehicles left overnight and this morning,” the UN official said.

A rebel contact inside Aleppo said that the “evacuation operation is continuing and has not ended”.

Another UN official said 750 people had so far been evacuated from Foua and Kefraya.

Aid workers have said the evacuation is likely to end on Thursday.

The International Committee of the Red Cross, which is assisting in the evacuation, reported that dozens of buses and smaller vehicles were expected to carry the remaining people out.

“We expect today to be the last convoys. The operation will continue all day long and during the night. If it goes smoothly the evacuation will end tonight,” said Ingy Sedky, the ICRC’s spokeswoman in Syria.

Ahmad al-Dbis, who heads a team of doctors and volunteers coordinating evacuations, said around 400 vehicles, including trucks and cars, had arrived overnight in Khan al-Assal, the staging ground where evacuees from Aleppo arrive after leaving the city.

From there, most have headed for territory to the west of the city still under the control of Syrian rebels.

President Bashar al-Assad’s government is waiting for the end of the evacuations so it can declare the completion of the offensive to recapture the one-time rebel stronghold.

Al Jazeera’s Imtiaz Tyab, reporting from Gaziantep, said hundreds were crammed on board the buses on Wednesday while food and water was also in short supply. But some, he added, were vowing to return when things settled down.

“The final remaining pocket of east Aleppo will be in the hands of President Assad any day now, marking his most significant victory since the uprising against his rule began in 2011,” he said.

“As the government prepares to fly its flag above the bombed-out area, many residents and fighters are vowing to return.”

Syria’s conflict started as a largely unarmed uprising against President Assad’s rule but quickly turned into a full-scale civil war that has killed hundreds of thousands. Attempts to negotiate a lasting ceasefire have failed time and again. 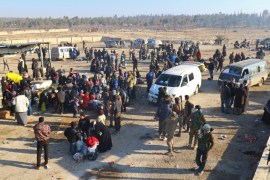 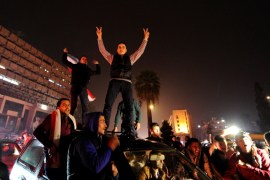