A Saudi-led Arab coalition will halt its use of British-made cluster munitions in Yemen, the Saudi government said.

In London, British Defence Minister Michael Fallon confirmed in parliament on Monday that the coalition had dropped “a limited number” of UK-supplied cluster munitions in Yemen.

Britain, a signatory to the international convention that prohibits use of the munitions, has been investigating whether the coalition dropped the BL-755 munitions in Yemen following an Amnesty International report in May.

“The government of Saudi Arabia confirms that it has decided to stop the use of cluster munitions of the type BL-755 and informed the United Kingdom government of that,” said the Saudi statement, carried by state news agency SPA.

It was the first Saudi confirmation of the coalition’s use of the cluster munitions.

Saudi Brigadier General Ahmed al-Assiri told Arabiya TV: “BL-755 bombs are used in a limited way and not in residential areas. We do not use the bombs in areas populated by civilians.

“This munition was used against legitimate military targets to defend Saudi towns and villages against continuous attacks by Houthi militia, which resulted in Saudi civilian casualties.”

Assiri said the coalition, which is battling Iran-allied Houthi rebels in Yemen, had not violated international law because it had not signed the cluster munitions convention.

Fallon stressed that Britain had sold the munitions to Riyadh in the 1980s, long before the 2008 convention.

“However, Saudi Arabia has now confirmed it will not further use BL-755 cluster munitions and I welcome that,” he said.

Cluster bombs, dropped by air or fired by artillery, scatter hundreds of bomblets across a wide area which sometimes fail to explode and are difficult to locate and remove, killing and maiming civilians long after conflicts end.

They pose a particular risk to children, who can be attracted by their toy-like appearance and bright colours.

London-based rights group Amnesty International in June alleged that “at least 16 civilians – including nine children – have been killed or injured by cluster submunitions between July 2015” and May of this year.

The BL-755 bomb, manufactured in Britain in the 1970s, is known to be in the stockpiles of Saudi Arabia and the United Arab Emirates, it said.

Saudi Arabia and its Gulf Arab allies began their military campaign in Yemen in March last year with the aim of preventing Houthi rebels and forces loyal to Yemen’s ex-president, Ali Abdullah Saleh, taking control of the country.

The war has killed more than 10,000 people and triggered humanitarian crises, including chronic food shortages, in the poorest country in the Arabian peninsula. Millions more have been displaced. 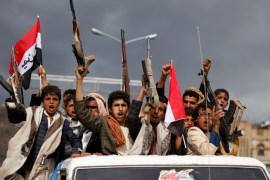 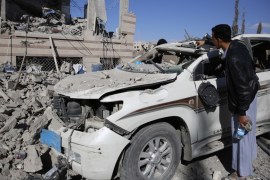