A South African peacekeeper was killed and two others were injured in a rebel attack in the city of Butembo in the Democratic Republic of Congo, according to a South African military statement.

UN and police sources told the AFP news agency that five rebels and one local policeman were also killed in Monday’s attack.

The clashes between security forces and rebel fighters, who attacked the prison in Butembo, came amid rising tension across the country as President Joseph Kabila’s mandate ran out.

Butembo is a city of around one million people in the troubled North Kivu province in the east of the country.

“At around 6am (04:00 GMT), the assailants, who were likely Mai-Mai fighters, launched an attack against the prison and other places,” AFP quoted the spokesman for the UN’s MONUSCO peacekeeping force, Felix-Prosper Basse, as saying.

Mai-Mai rebels have staged several attacks in Butembo in recent months. Although the reasons for their return appear unclear, some residents say they have heard some fighters claim they are seeking to overthrow Kabila.

The country was due to hold a presidential election this year as Kabila’s mandate ends on December 20, but the authorities failed to organise the polls and there is widespread fear of protests and violence.

Kabila is barred from a third mandate under the constitution and the opposition has accused the authorities of delaying the vote in the hope of reworking the constitution to extend his tenure.

The UN peacekeeping mission in eastern Congo includes a force intervention brigade with a mandate to take offensive military action against rebel groups. 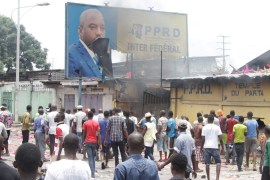 Move to postpone this year’s presidential election to April 2018 called a “flagrant violation” of the constitution.