West African leaders are to head to Gambia to try to persuade incumbent President Yahya Jammeh to agree “to leave office” after his defeat at the ballot box, according to a Senegalese foreign ministry source.

“These leaders will ask him to leave office,” the source said.

Mankeur Ndiaye, Senegalese foreign minister, said an ECOWAS delegation was previously due in Banjul last week but Jammeh did not allow them to visit.

However, in a dramatic about-face that drew international condemnation, the former coup leader on Friday decried “serious and unacceptable abnormalities” and called for fresh polls.

In a statement broadcast on state television late on Saturday, Jammeh’s Alliance for Patriotic Reorientation and Construction (APRC) party said it was preparing a petition “against the flawed decision of the Independent Elections Commission”.

The deadline for submitting a challenge to the court is Tuesday.

Barrow is due on Tuesday to welcome the ECOWAS leaders along with a delegation of UN representatives, which the president-elect said gave him hope that he would soon take power.

Sirleaf said over the weekend that the reversal of Jammeh’s decision “threatened peace”.

She asked him on Saturday to “do the right thing and take actions to facilitate a smooth and peaceful transition in Gambia”.

Jammeh seized power in a coup in 1994 when he was an army lieutenant and has ruled ever since, wining four elections, that were criticised by rights monitors, and surviving several coup attempts. International human rights groups accuse him of widespread violations and repression.

A statement from the opposition coalition read to reporters in Barrow’s presence on Monday called for Jammeh to step down immediately.

Before his surprise change of mind, he had pledged to hand over power to Barrow in January following the transitional period dictated by Gambian law.

However, Gambia has no sitting Supreme Court. In order to hear Jammeh’s complaint, legal experts believe at least four judges must be hired.

“We do not recognise that the outgoing president has the constitutional authority in the last days of his presidency, to appoint any Supreme Court judges in Gambia for the purpose of receiving his petition,” opposition figure Mai Fatty said. 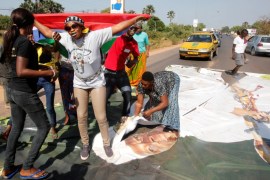 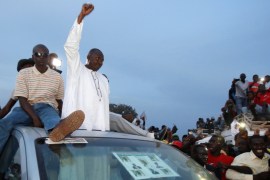 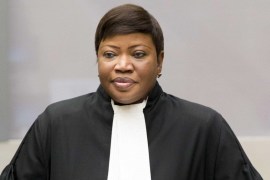