A court in the Netherlands has found Geert Wilders, an anti-Islam politician, guilty of discrimination for leading a chant against Moroccans at a 2014 campaign rally.

Wilders was convicted of discrimination but sentenced to no punishment on Friday for comments he made at a March 2014 local government election rally in The Hague.

When he asked supporters whether they wanted “fewer or more Moroccans in your city and in the Netherlands”, the crowd shouted back “Fewer! Fewer!” and a smiling Wilders answered: “We’re going to organise that.”

Wilders said his conviction was “insanity”, adding the three judges who handed down the ruling were “haters” of his far-right Freedom Party (PVV).

“Three PVV-hating judges declare Moroccans a race and convict me and half of the Netherlands. Insane,” he wrote in a tweet shortly after the verdict.

Wilders boycotted most of the trial, but in closing remarks on November 23 told judges his comments were obviously not intended as a call to genocide – but rather a reference to his official party platform.

Prosecutors, who rejected Wilders’ assertions that the trial was politically motivated and an unfair attempt to limit his right to free speech, had asked that a fine of 5,000 euros, but no prison sentence, be imposed.

Wilders, who is leading in several polls for the March elections, said he was not guilty of any wrongdoing.

“Every verdict, acquittal, or conviction will de facto change nothing,” he said in an interview with De Telegraaf published on Friday.

“I will continue to speak the truth regardless, including about the Moroccan problem, and no judge, politician or ‘terrorist’ will stop me.”

A previous attempt to prosecute Wilders for anti-Islam remarks, such as likening the religion to Nazism and calling for a ban on the Quran, ended in acquittal in 2011.

That process was widely seen as strengthening his reputation as a defender of freedom of speech and increased his popularity.

“This could drum up support for some of the issues he is eager to champion: euro-scepticism, clamping down on migrants,” Barker said. “But what he is convinced he will continue to do is beat the nationalist drum, so how he plays this conviction is really yet to be seen.”

Moroccan Dutch organisations welcomed the verdict for drawing a clear line about the limits of free speech.

“This ruling protects minorities in our country from the racist poison that is seeping into our society,” said anti-discrimination platform NBK, which previously filed a failed lawsuit against Wilder in 2007.

Wilders’ far-right Freedom Party is leading in the polls in advance of a crunch vote on March 15.

The latest numbers put PVV at 34 seats in the 150-seat lower house of Dutch parliament, some 10 seats ahead of his nearest rival, Prime Minister Mark Rutte’s Liberals.

Rutte declined to comment on the ruling because the case is under appeal. But he said his VVD party ruled out sharing power with Wilders, unless he retracts the comments about Moroccans.

About 400,000 people of Moroccan origin live in the Netherlands.

“This statement [by Wilders] can be regarded as affecting the dignity of this group as a whole. It is insulting for the entire group,” the court ruling said. 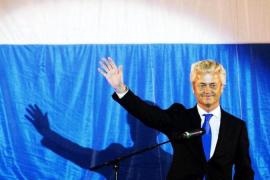 The rise and fall of Geert Wilders?

Geert Wilders’ shocking rise to prominence in Dutch politics looks to be over soon, says analyst.