Israeli jets fired two missiles from Lebanese airspace toward the outskirts of the Syrian capital Damascus early on Wednesday, the official Syrian news agency said, in a strike on an unknown target that caused loud explosions.

State news agency SANA said the missiles struck the Al-Sabboura area, west of Damascus, and did not cause any casualties.

Citing an unnamed military source, SANA did not specify what the missiles struck, but Damascus residents reported on social media hearing loud blasts around 2am.

“In a move aimed at diverting the attention on the victories of the Syrian army and to raise the morale of the terrorist gangs, Israeli warplanes fired two rockets from the Lebanese aerial space into the Sabboura area,” SANA said, quoting a military source.

The Israeli military declined to comment, but Tel Aviv is widely believed to have carried out a number of air strikes in Syria in the past few years that have targeted advanced weapons systems, including Russian-made anti-aircraft missiles and Iranian-made missiles.

The arms are believed to have been destined for the Lebanese Shia Hezbollah group, a close ally of the Syrian government and a fierce enemy of Israel.

While the target of Wednesday’s air strikes is not yet known, the government-held town of Sabboura is close to the Damascus-Beirut highway and is often used by Hezbollah.

The strikes came days after Israeli aircraft hit a machinegun-mounted vehicle inside Syria, killing four fighters of the Yarmouk Martyrs Brigade, a group associated with the Islamic State of Iraq and the Levant (ISIL) after they opened fire on a military patrol on the Israeli-controlled side of the Golan Heights.

Israel has largely remained unaffected by the Syrian civil war raging next door, suffering only sporadic incidents of spillover fire that have generally been dismissed as tactical errors by forces loyal to Bashar al-Assad. 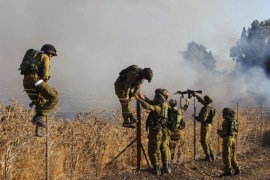 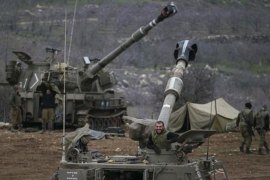 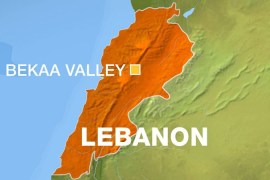