More than a quarter of EU residents have said that sex without consent may be justified under certain circumstances, according to a new survey commissioned by the European Commission.

Overall, 27 percent of 27,818 EU citizens who participated in the survey thought forced sexual intercourse was acceptable in at least one set of circumstances.

Some 12 percent of respondents, who were selected from different social and demographic backgrounds, said forced sexual intercourse was acceptable if the victim was “drunk or on drugs”.

Seventy percent of respondents said that sexual harassment of women was common in their country.

Almost one third of respondents, 31 percent, said they believed women were more likely to be raped by a stranger than by someone they knew, with respondents in Eastern areas of the EU the most likely to agree with that.

The survey also demonstrated that about one in five Europeans hold victim-blaming views,  agreeing that women make up or exaggerate their claims about sexual assault. One in five said that violence against women was “often provoked by the victim”.

READ MORE: Gender wage gap will not close for 170 years

Overall, 22 percent of respondents said that they believed “women often make up or exaggerate claims of abuse or rape” with proportions varying from 47 percent in Malta to 8 percent in Sweden.

Also, almost one in five respondents (17 percent) agreed that “violence against women is often provoked by the victim”, with respondents in Eastern areas of the EU the most likely to agree.

Across the EU, almost one quarter (24 percent) of respondents said they knew of a friend or family member who had been a victim of domestic violence, while 18 percent knew of someone in their immediate area or neighbourhood.

Almost all respondents (96 percent) said domestic violence against women was “unacceptable”, although 12 percent said they did not think it should always be punished by law.

Around one in six respondents across the EU also said that they considered domestic violence to be a “private matter” that should be handled within the family. Respondents in eastern parts of the EU were the most likely to agree with that view.

The report’s authors called for more attention to be paid to protecting women from becoming victims of sexual assault but said: “There are reasons for cautious optimism in the findings.”

“Across the EU there is widespread agreement that domestic violence, sexual harassment and other acts of gender-based violence are unacceptable or wrong,” they said. 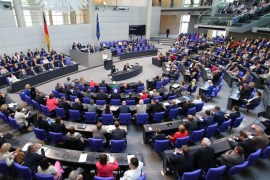 “No means No” legislation classifies groping as sex crime, makes it easier to report rape and deport foreign offenders.