Hundreds of Cuban Americans in Miami’s Little Havana neighbourhood have taken to the streets to celebrate the death of revolutionary Cuban leader Fidel Castro.

Castro, who led a rebel army to an improbable victory in Cuba, and defied the power of 10 US presidents during his half-century rule, died on Friday at age of 90.

Thousands took to social media, with some commemorating the revolutionary leader’s achievements such as universal medical care, while others condemned his rule and celebrated his death.

Calle ocho is closed entirely from the crowd in front of @VersaillesMiami bc #FidelCastro's death @MiamiHerald pic.twitter.com/oMxlIbU15f

Rest in Peace for education,healthcare & racial equality for the people. Rest in Pain for starving, murdering & silencing them. #FidelCastro

My Cuban friends who I grew up with that fled Cuba under Communist Fidel Castro can now feel at peace….and celebrate!🎉🎉🎊✨!!!! #FidelCastro

The flags are out on 49th Street in Hialeah #FidelCastro pic.twitter.com/asDdl544HL

Ileana Ros-Lehtinen, a senior Republican representative from Florida, where thousands of Cubans live, said on Twitter:

We must seize the moment and help write a new chapter in the history of #Cuba; that of a Cuba that is free, democratic, and prosperous.

Pots and pans celebrating in the street. This is an incredible night. 🇨🇺🇨🇺🇨🇺🇨🇺 #FidelCastro pic.twitter.com/FZ45M1CIg4 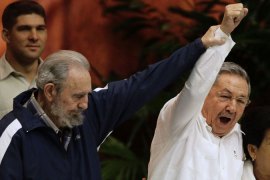