The Iraqi parliament has passed a bill recognising the Shia militia fighters, the Popular Mobilisation Forces, as a government entity operating alongside the military.

The bill passed on Saturday will see the establishment of the Popular Mobilisation Forces Commission, which critics said could only widen sectarian divisions in the war-torn country.

Prime Minister Haider al-Abadi welcomed the legislation, which was supported by 208 of the parliament’s 327 members, saying the newly-formed force “will represent and defend all Iraqis, wherever they are.”

Opinion: Iran’s ‘Shia Liberation Army’ is par for the course

The law places the militias under Abadi’s command, while giving the militiamen salaries and pensions that mirror those of the military and the police.

The force, numbering more than 100,000, is currently involved in the battle to retake the city of Mosul, fighting the Islamic State of Iraq and the Levant (ISIL, also known as ISIS) in the western flank of the city at Tal Afar.

The forces have been key in retaking Tal Afar, which lies on a supply line from Mosul to ISIL-held territories in Syria.

They reportedly have also been involved in trying to cut off the main road connecting Mosul and Tal Afar, denying ISIL fighters access to more supply.

But Al Jazeera’s Charles Stratford, reporting from Makhmour in northern Iraq, said the passage of the bill is “potentially very significant” in igniting tensions between Shia muslims and Sunnis.

“They don’t garner much trust among many Sunni and Kurdish Iraqis in this country,” he said. “So the passage of this bill has serious ramifications.”

On Saturday, Sunni Arab politicians and lawmakers said the bill was evidence of what they called the “dictatorship” of the country’s Shia majority.

A day earlier, Osama al-Nujaifi, the Sunni-affiliated vice president, had warned that approving the bill would weaken the military establishment by creating another fighting force that is considered sectarian.

Iraq’s Sunni Arabs and rights groups have long complained that the Popular Mobilisation – or Hashid al-Shaabi – forces have been involved in extrajudicial killings, abuse and the theft or destruction of property in areas where they drove out ISIL.

The militias’ commanders, however, deny the charges or insist that the excesses are the work of an isolated few.

The Shia militias that operate under the banner of the Popular Mobilisation forces, most of which are backed by neighbouring Iran, have been bankrolled and equipped by the government since shortly after ISIL swept across much of northern and western Iraq in 2014.

Many of these groups existed long before ISIL emerged, fighting American troops in major street battles during the US military presence in Iraq from 2003 to 2011, as well as al-Qaeda in Iraq – which later became ISIL.

They played a key role in checking the advance of ISIL on Baghdad and the Shia shrine cities of Samarra and Karbala in the summer of 2014, and later helped liberate ISIL-held areas to the south, northeast and north of Baghdad, standing in for the security forces, which largely collapsed in the face of the ISIL blitz in 2014.

However, their role has somewhat diminished as more and more of Iraq’s security forces have regained their strength. 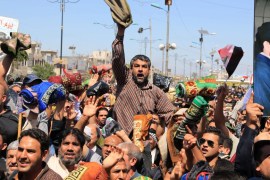