For some, it’s also triggering reflection on China’s one-party rule.

At the same time, 35 percent of respondents in the poll conducted by the American Pew Research Centre saw Clinton unfavourably, while 40 percent had an unfavourable impression of Trump.

China’s leaders have not publicly indicated their preference. But an editorial in the state-controlled Global Times earlier this year denounced Trump as a racist and said his candidacy is proof that US-style democracy is failing. 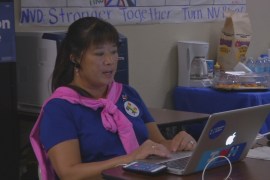