Dozens of people have been killed and more than 100 injured in southwestern Pakistan after a bomb explosion claimed by the armed group ISIL ripped through a shrine packed with worshippers.

Provincial Home Minister Sarfaraz Bugti told AFP news agency on Saturday that at least 52 people have been killed in the attack in the Hub district of the restive Balochistan province.

The blast at Shah Noorani shrine occurred while hundreds of people were inside, local district commissioner Hashim Ghilzai said.

Ghilzai said at least 100 people were wounded, who were rushed to the district headquarters of Hub and the port city of Karachi located nearly 100km south of the blast site.

“There was a very large crowd at that Sufi shrine when the explosion happened,” Al Jazeera’s Kamal Hyder said . “They were commemorating the Sufi saint’s 500th birth anniversary. People killed include women and children,” said the Al Jazeera correspondent  reporting from the capital Islamabad.

The Sufi shrine named Shah Noorani attracts a lot of people at this time of the year from other parts of Pakistan.

The government dispatched 25 ambulances from the district headquarter Hub to the shrine, said Akbar Harifal, provincial home secretary for Balochistan.

“Every day, around sunset, there is a dhamaal [ritual dance] here, and there are large numbers of people who come for this,” said Nawaz Ali, the shrine’s custodian.

Emergency services faced difficulties reaching the site because of its remote location.

Pakistan Army spokesman Lieutenant General Asim said 20 ambulances and 50 soldiers had reached the site, while a further 45 ambulances 100 troops were on their way.

A military helicopter would attempt evacuations at night, he added, but medical teams could not access the area by plane as there were no air strips close by.

It was not clear if the attack was carried out by a suicide bomber or a planted device, according to Bugti.

The Islamic State of Iraq and the Levant group, or ISIL, also known as ISIS, said in a statement via its Amaq news site that it carried out Saturday’s bombing.

The armed group, which controls parts of Syria and Iraq, also claimed responsibility for the last major attack in the province on a police academy last month that  killed 61 people .

Balochistan is the scene of a violent separatist movement. But officials recently told Al Jazeera that the area has become a safe haven for fighters fleeing military operations in other regions bordering Afghanistan.

In the largely remote and neglected region, Pakistani security forces and symbols of the state have come under attack from armed groups while civilians have lost lives in sectarian violence.

Balochistan is a strategically important province to Pakistan because of the high concentration of natural resources – including oil, coal, gold, copper and gas reserves, which generates substantial revenue for the federal government – and the only deep-sea port at Gwadar.

The country’s largest province is also a key link in a $46bn transport and trade corridor between Pakistan and China, which hinges on the Gwadar port. 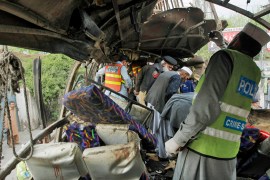 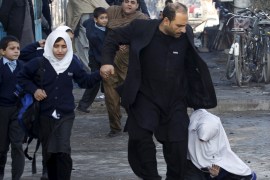 At least 10 killed, including three attackers, as Afghan forces flush out fighters holed up near consulate in Jalalabad. 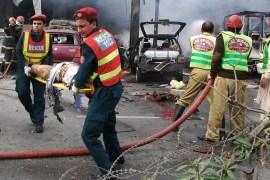