WikiLeaks says that founder Julian Assange’s internet access has been cut by an unidentified state actor.

The whistle-blowing organisation said on Twitter on Monday that they have activated their “contingency plans” after its co-founder’s internet service was intentionally cut off.

The internet is one of the few available means through which Assange can maintain contact with the outside world.

He has been up holed up at the Ecuadorean embassy in London for more than four years after skipping bail to avoid being extradited over sex crimes allegations.

The cramped quarters haven’t prevented the Australian transparency activist from working and WikiLeaks continues to deliver scoops, including revelations that have rattled Hillary Clinton’s campaign for president as the US election enters its final stretch.

Earlier this month, Assange said the group would publish about one million documents related to the US election and three governments in coming weeks, but denied the release was aimed at damaging Hillary Clinton.

Clinton’s campaign made statements that WikiLeaks is working with the Russian government to help defeat the Democrat in favour of Trump.

It recently emerged that Hillary Clinton reportedly wanted to “drone” Assange when she was the US secretary of state.

Assange is wanted in Sweden for questioning over sexual assault allegations in 2010. He denies the charges, and says he fears subsequent extradition to the US, where a criminal investigation into the activities of WikiLeaks is under way.

In 2010, WikiLeaks released more than 90,000 secret documents on the US-led military campaign in Afghanistan, followed by almost 400,000 US military reports detailing operations in Iraq. 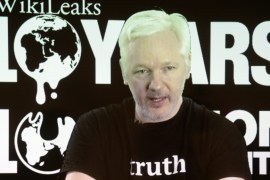 Julian Assange pledges to release one million documents related to US vote, but denies aiming to harm Clinton. 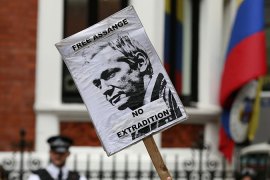 The curious case of Julian Assange

Ecuador has granted the Wikileaks founder asylum but will the UK grant him safe passage out of the country?