At least 24 people have been killed and dozens injured in a stampede at a Hindu religious ceremony in northern India, according to police.

Saturday’s crush happened on the outskirts of Varanasi, a city in Uttar Pradesh state known for its temples, as people tried to cross a crowded bridge over the Ganges river.

Police officer SK Bhagat said that organisers were expecting 3,000 Hindu devotees at the ceremony, but that more than 70,000 thronged the ashram of a local Hindu religious leader, Jai Baba Gurudev, on the banks of the Ganges river.

READ MORE: Deaths after stampede at Hindu festival in India

Millions of Hindus go to Varanasi every year to pray and wash away their sins by taking a dip in the river.

“We were not prepared for such a large crowd,” Raj Bahadur, a spokesman for the organisers, told the AP news agency.

The stampede occurred as police started turning back people from the overcrowded Rajgahard bridge, the Press Trust of India news agency cited Bahadur as saying.

That triggered a rumour among the devotees that the bridge had collapsed, and they started running for safety, he said.

Deeply saddened by the loss of lives in the stampede in Varanasi. Condolences to the bereaved families. Prayers with those injured.

Prime Minister Narendra Modi said he was deeply saddened by the tragedy. “I have spoken to officials and asked them to ensure all possible help to those affected,” he tweeted.

Two police officers at the scene of the stampede said that officials were now struggling to deter pilgrims from entering a religious site near the bridge.

“We are deploying over 100 police officers to control the crowd. People are in a state of panic,” Ravi Tyagi, a police officer, told Reuters news agency.

Ravindra Sharma, who was injured in the stampede, said his teenage daughter was missing and the authorities were unable to trace her.

“We came to seek the blessings of our God; only God can help me find her,” he said.

In October 2013, a stampede in Madhya Pradesh state in central India killed more than 110 people, mostly women and children. 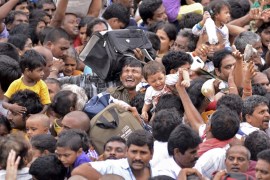 At least 27 killed during Pushkaralu festival as thousands pushed to bathe in the Godavari river in southern state.