A visibly emotional President Barack Obama – at one point wiping tears from his cheek – unveiled his plan to tighten control and enforcement of firearms in the US, using his presidential powers in the absence of legal changes he implored Congress to pass.

He insisted it was possible to uphold the second amendment while doing something to tackle the frequency of mass shootings in the US that he said had become “the new normal”.

Every time I think about those kids, it gets me mad.

The much-debated second amendment of the constitution guarantees the right of citizens to own firearms. More than 100,000 Americans have been killed by firearms over the past 10 years.

“This is not a plot to take away everybody’s guns,” Obama said. “You pass a background check, you purchase a firearm. The problem is some gun sellers have been operating under a different set of rules.”

Obama’s actions ensure that gun rights – one of the most bitterly divisive issues in America – will be at the forefront of the 2016 presidential campaign, which begins in earnest next month with the first primary contests.

Accusing Obama of gross overreach, many of the Republican presidential candidates have vowed to rip up the new gun restrictions upon taking office.

Democratic frontrunner Hillary Clinton said she was proud of Obama’s efforts and promised she would safeguard them, the AP news agency reported.

Obama wiped tears away as he recalled the 20 young children killed in 2012 at Sandy Hook Elementary School in Newtown, Connecticut.

He paid tribute to the parents, some of whom gathered for the ceremony, who he said had never imagined their child’s life would be cut short by a bullet.

“Every time I think about those kids, it gets me mad,” Obama said.

At the centerpiece of Obama’s plan is a more sweeping definition of gun dealers that the administration hopes will expand the number of sales subject to background checks.

But at gun shows, websites and flea markets, sellers often skirt that requirement by declining to register as licensed dealers.

Aiming to narrow that loophole, the Justice Department’s Bureau of Alcohol, Tobacco, Firearms and Explosives is issuing updated guidance that says the government should deem anyone “in the business” of selling guns to be a dealer, regardless of where he or she sells the guns.

To that end, the government will consider other factors, including how many guns a person sells, how frequently, and whether those guns are sold for a profit.

The White House also put sellers on notice that the administration planned to strengthen enforcement – including deploying 230 new examiners the FBI will hire to process background checks.

About one-third of Americans live in a household where at least one person owns a gun.

Particularly in rural areas where firearms are a way of life, many citizens do not believe gun laws should be made stricter.

The reverse is true in urban areas, where majorities want tighter firearm regulations. 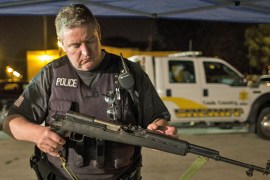 As deadly gun violence continues, US president’s use of executive powers for greater control takes the political stage.