Syrian army jets have launched at least 100 air raids on rebel-held eastern Aleppo, killing 26 people, since the government announced a new push on the city, according to rescue workers.

The military, which is backed by the Russian air force, said late on Thursday that it was starting a new operation against the rebel-held east, which is home to at least 250,000 people and has been battered by bombing raids for months.

At least 15 Aleppo neighbourhoods were targeted, Al Jazeera’s Amr al-Halabi reported from the city, adding that the relentless bombardment was hampering the ability of rescue workers to help civilians caught up in the fighting.

Three centres for a volunteer rescue group known as the White Helmets were hit in the raids.

“We have four centres in eastern Aleppo. The aircraft targeted three centres. Two of them are now out of service,” Abdul Rahman al-Hassani, of the White Helmets, told Al Jazeera.

He added that five vehicles belonging to the White Helmets were destroyed, including an ambulance.

“Our centres were the direct target [of the strikes],” Hassani said.

The White Helmets group, which operates in rebel-held parts of the country, was this week named as one of the winners of an award often called “the alternative Nobel prize”.

Rebel districts have been under siege by the army for most of the past two months after troops overran the last supply lines.

A truce deal hammered out by Russia and the United States briefly halted the violence earlier this month, but it collapsed after only a week without any of the promised deliveries of desperately needed relief supplies.

“What is happening is Aleppo is under attack and everyone is going back to the conflict,” United Nations envoy Staffan de Mistura said.

De Mistura has estimated that more than 400,000 people have been killed since the conflict began with anti-government protests in March 2011, though that number is not an official UN estimate. 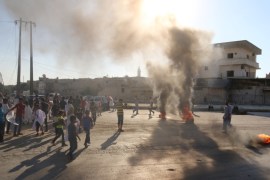 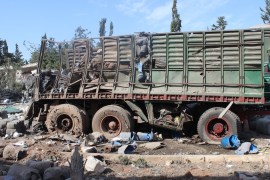