A Japanese court has approved plans to relocate a US military base on the island of Okinawa, in a decision likely to anger locals who want to see American military presence removed altogether.

Tokyo wants to move the unpopular Futenma marine airbase from a crowded residential district to a sparsely populated area in the northern part of the island, but the plan has been opposed by many locals, including Okinawan governor Takeshi Onaga.

A judge in the prefectural capital of Naha ruled on Friday in favour of the central government, a court spokesman said, in the first judicial decision over the disputed reclamation.

“There is no choice but to go ahead with the landfill in order to reduce the trouble at Futenma,” presiding judge Toshiro Tamiya told the court, according to Jiji Press.

The dispute has seen Onaga and Prime Minister Shinzo Abe’s government file rival lawsuits as local authorities have blocked plans to reclaim land for the relocation – a priority for Tokyo as it seeks to satisfy its ally, the US.

After the verdict, Onaga told local media that he would appeal to the Supreme Court and pledged to do whatever he could to block the relocation.

Tokyo and Washington first proposed moving the airbase in 1996, while insisting it must remain on Okinawa – a strategic island in the East China Sea from where US troops and aircraft can react to potential conflicts throughout Asia.

READ MORE: Voices of Okinawa – Standing against a US military base

The roots of the presence goes back to the end of World War II when Okinawa was the site of a battle between Japan and the US, followed by a 27-year US occupation.

Violent crimes have prompted large-scale protest demonstrations before on Okinawa.

In 1995, tens of thousands rallied following the rape by three American personnel of a 12-year-old girl. The protests prompted Washington to pledge to reduce the US footprint on the fortified island.

Nearly 100,000 people joined a protest in 2010 against the building of the new base off the northern coast.

US officials have also grown increasingly concerned that the behaviour of its troops on the island could jeopardise support among Japanese for the security relationship.

Washington has imposed restrictions, including on off-base alcohol consumption ban after an intoxicated sailor injured two locals while driving this month. 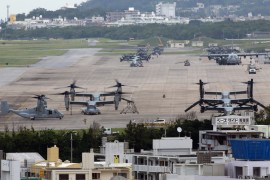 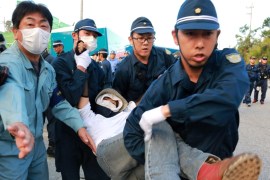 Thousands to call for US troops’ exit from Okinawa

Amid growing anger, tens of thousands of anti-US base protesters are expected to stage their largest rally in 20 years. 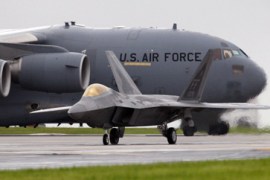 How can the row over the island’s airbase be settled without souring ties with the US?