North Korea has promised a tough response to what it deemed a “declaration of war” by the United States, after Washington blacklisted the country’s leader Kim Jong-un for the first time over human rights abuses.

Pyongyang described the sanctioning of Kim as a “hideous crime”, the official Korean Central News Agency reported on Thursday.

“What the US did this time, not content with malignantly slandering the Democratic People’s Republic of Korea, is the worst crime that can never be pardoned,” it cited the foreign ministry as saying.

“Under Kim Jong-un, North Korea continues to inflict intolerable cruelty and hardship on millions of its own people, including extrajudicial killings, forced labour, and torture,” said Adam Szubin, the acting Treasury under-secretary for terrorism and financial intelligence.

The Treasury said Kim, North Korea’s Supreme Leader, was responsible for abuses in his roles as head of the country’s Ministry of State Security and Ministry of People’s Security.

According to officials in Washington, North Korea’s Ministry of State Security holds between 80,000 and 120,000 prisoners in political prison camps where torture, execution, sexual assault, starvation and slave labour are common.

OPINION: Kim Jong-un – What we know about the North Korean leader

The US also alleged that another ministry overseen by Kim runs a network of police stations, detention centres and labour camps, where suspects under interrogation “are systematically degraded, intimidated and tortured”.

Authorities in Washington for the first time identified other top officials directly involved in rights abuses, including Choe Pu Il, the minister of people’s security, Ri Song-chol, a senior official in the Ministry of People’s Security, and Kang Song-nam, a bureau director with the Ministry of State Security.

Treasury official Tom Malinowski, who oversees human rights and labour issues, said that many of the people on the list had not been previously known.

“This won’t bring any sort of dramatic change, but lifting anonymity of these functionaries will make them think twice when they consider an act of cruelty or oppression,” Malinowski said.

Another senior US official said that naming the specific officials involved would help strip the anonymity under which they carry out systematic abuses. 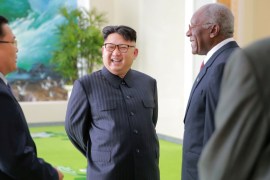 Report says the country’s prison camps commonly subject many of the 120,000 detainees to torture, assault and execution.