Beirut – As Lebanon braces itself for another round of popular protests this week by civil society activists, the country’s politicians are scrambling to achieve an agreement on pressing political issues that have so far kept the government in a political deadlock for months.

On Wednesday, a new round of dialogue is expected to take place following a call by parliament speaker Nabih Berri on August 30 to address a number of issues including: the vacant presidency, the parliament and government agenda, as well as the electoral draft law.

The call for dialogue comes on the heels of mass protests that were initially triggered by the rubbish collection crisis but have now morphed into a much larger movement against government corruption and political dysfunction.

Civil society groups that organised a massive protest on August 29 have made fresh calls for another rally on Wednesday against the dialogue outside parliament offices.

“This 16th century ‘House of Lords’ needs to end,” said Nizar Ghanem, an activist with the You Stink campaign, in reference to the national dialogue sessions. “The idea that our politics can be done by a handful of feudal patriarchs is not acceptable, and what they’ve been doing over the last 15 years is basically gutting out our institutions.”

The call for dialogue has been well-received by Lebanon’s two rival political powers. Both the March 8 bloc (led by Christian leader Michel Aoun and Hezbollah) and the March 14 bloc (led by the Saudi-backed Tayyar al-Mustaqbal party) have agreed to attend the national dialogue session. A March 14 minor Christian faction, the Lebanese Forces headed by Samir Geagea, announced it would boycott the meeting on the basis that such a session would not be able to break the deadlock.

The session is expected to address key issues that have brought the government to a standstill, including the presidential deadlock, a new electoral law, citizenship rights for Lebanese expatriates, and cabinet functionality.

Lebanon has been without a president since May 2014, as parliament has been unable to obtain the necessary quorum to elect a new president. Furthermore, parliamentary elections have been cancelled twice and parliament extended its own mandate on both occasions, as it was unable to reach a consensus on an electoral law.

With regards to the cabinet, the government decision-making process has reached a standstill, as ministers have been unable to agree on the order in which to tackle the items on their agenda.

What is the point of parliament if you're having the national dialogue? These dialogues should be taking place among the elected officials in parliament, not by the heads of sectarian groups.

Yet, Lebanon’s track record of fruitful national dialogue sessions has been pitiful. According to several analysts, the dominant perception among many Lebanese is that this latest round of dialogue is just a stalling tactic to contain the momentum garnered by the protesters, while at the same time, provide the traditional political leaders with an opportunity to form a united front against the growing popular resentment on the streets.

Some analysts believe that resorting to national dialogue goes further to marginalise the roles and functions of parliament.

“What is the point of parliament if you’re having the national dialogue? These dialogues should be taking place among the elected officials in parliament, not by the heads of sectarian groups,” said Sami Nader, a political science professor at the University of St Joseph. “Essentially, it is freezing the whole system and bringing tribal chiefs into a pseudo-institution,” Nader told Al Jazeera.

“The purpose behind [the dialogue call] is to try and make a breakthrough and barter on the different issues; if we go this way with the presidency, then we can move that way with the right for citizenship,” he continued. “All in all, it’s a stalling tactic and a show to pay lip service to the people and say ‘look, we’re meeting’.”

The first national dialogue session was held in March 2006, also called for by Berri following political tensions triggered by the assassination of former Prime Minister Rafik al-Hariri in Februrary 2005 and the withdrawal of Syrian forces from Lebanon following three decades of military presence.

The items on the agenda also included a discussion on the national defence strategy, relations with Syria, and the presidency. The outcome was never fully implemented due to the fragile security situation in the country at the time.

In 2008, following another bout of political violence, a new round of national dialogue was initiated by then-President Michel Suleiman. After 11 sessions, the Baabda Declaration was issued and saw the government officially adopt a position of disassociation from the ongoing conflict in Syria. However, this did not deter some political factions from intervening in the war in Syria.

In 2014, a third round of national dialogue was then announced, again by Suleiman. However, the dialogue was rendered irrelevant, as sessions were boycotted by several factions across the political divide.

According to Maha Yahya, a senior analyst with Carnegie Middle East Center in Beirut, Berri is attempting to use old tactics from 2006 and apply them in 2015.

“It’s the exact same toolbox as 2006, and it highlights that the political class doesn’t really know how to deal with the current situation, as this tool is no longer workable in Lebanon,” Yahya told Al Jazeera. “The 2006 dialogue session led to nowhere, and the 2012 Baabda Declaration was pretty much rejected weeks later.”

Yahya believes the move is an attempt to “reign in the anger on the streets”, but that it is not likely to happen. “If they do move forward on some things, it may diffuse some tensions; but the momentum has picked up and people won’t settle for mere lip service,” Yahya added.

“They need to stop holding people’s quality of life hostage for their own political interests. The protests today have created an increasing sense of urgency to reach a compromise.”

Lebanese civil society groups have called for mass rallies to protest against the dialogue meeting on Wednesday.

The past few weeks have witnessed a growing support for the protest movement as more and more citizens joined in the cry against corruption and the ongoing rubbish crisis. Last July, rubbish began piling up on the streets after the capital’s main landfill was closed. The government has been unable to find an alternative system for waste management amid government paralysis and bickering among politicians.

The most pressing demand, according to protest organisers, is the resignation of the environment minister, who has so far refused to heed their calls, declaring that his resignation would lead the country into chaos.

The call for a national dialogue session has also been met with disdain by the protesters. “Our position is clear,” Ghanem told Al Jazeera. “The current fight with the government is on the issue of the garbage and they’re trying to deflect from the issue… The Minister of Environment has to be held accountable for his file.”

“It is completely unconstitutional; they are self-appointed mafia leaders,” he said. “Why are we paying 128 parliamentarians to represent us and resolve our issues when they’re being tackled by these select few politicians?” 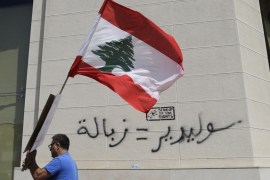 Organisers of anti-corruption protesters assess damage after two nights of clashes with police, in which one man died. 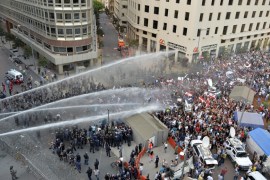 Many injured in Beirut ‘You Stink’ protest over rubbish 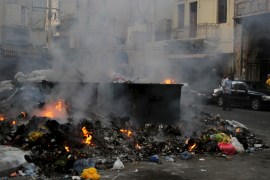