They will receive food before being registered and processed by authorities. About 4,000 refugees have arrived so far, police say, and the number is expected to reach 10,000 throughout Saturday.

The development came just hours after long lines of buses left Budapest packed with refugees, following an announcement by Austria that it had agreed with Germany to let them in.

Hungary’s government sent about 100 buses to pick up the thousands of refugees camped in front of the train station in Budapest and another 1,200 walking down the main highway to Vienna.

Austria said they would be granted entry regardless of European Union rules.

The Hungarian government cited safety concerns for the decision to deploy buses, after days of cancelled trains and confrontation with riot police refusing to let the refugees pass.

But it appeared to mark an admission that the government had lost control in the face of overwhelming numbers of refugees determined to reach western Europe, having fled war and poverty in the Middle East, Africa and Asia.

Many have refused, determined to get to the richer and more generous countries of northern and western Europe, mainly Germany.

On Friday the crowd that swelled to over 1,000 broke away from the Budapest railway terminus, trudging through the city over a bridge and out onto the main highway to Vienna, escorted by police struggling to keep the road open.

“The government has not commented on why they changed their mind over the issue yet,” Al Jazeera’s Mohammed Jamjoom said on Budapest’s decision to let refugees go to the Austrian border.

He said it seemed that the Hungarian prime minister, regardless his tough stance, took some of the criticism against his country over the refugee issue seriously.

Earlier on Friday, Al Jazeera’s Andrew Simmons, reporting from near the M1 and M7 motorways outside Budapest, said authorities appeared to be helping the refugees make the journey despite fears the road would be blocked.

“There are hundreds of people who have marched something like 10km from the centre of Budapest from the rail station to here. … They say they have no option but to do this.

“It may sound far-fetched but they’re intent on reaching the border.

“The refugees were panicking because they thought the motorway had been blocked off. That roadblock was in fact there to help them rather than hinder them.”

Our correspondent said Hungarian volunteers were handing out water bottles to help the refugees marching in sweltering conditions.

The turmoil outside Budapest contrasted with a pledge by Viktor Orban, Hungarian prime minister, to get to grips with Europe’s worst refugee crisis since the Yugoslav wars of the 1990s.

Parliament tightened laws that his government said would effectively seal Hungary’s southern border to refugees as of September 15.

Orban hailed “a different era”, but Friday brought more desperate scenes in a crisis that has left Europe groping for unity.

Orban, one of Europe’s most outspoken critics of mass immigration, took to the airwaves to issue sharp warnings that Europeans could become a minority on their own continent.

But his government’s plans for a crackdown appeared to be breaking down in the face of such large numbers headed for Germany, which had said Syrian refugees could register there regardless of where they enter the EU, contrary to EU rules.

More than 140,000 people have been recorded entering Hungary so far this year through the EU’s external border with Serbia, where Orban’s government is building an 11.5ft high wall.

Countless others may have entered without registering.

In Bicske, west of Budapest, a two-day standoff ended after up to 300 refugees managed to escape from a train held up by police demanding they disembark and go to a nearby reception centre.

Those fleeing were pursued by riot police and a Pakistani man died, police said. State television said he had stumbled and hit his head as he ran down train tracks. 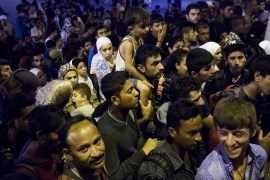