Fighters of the Islamic State of Iraq and the Levant (ISIL) have mounted a suicide attack on an Iraqi army regiment in eastern Fallujah, claiming at least 14 lives.

Military sources told Al Jazeera the attack on Sunday targeted a base in the village of al-Harariyat.

The fatalities reportedly included fighters of the Shia unit, Popular Mobilisation Forces, which is helping the government battle ISIL.

Iraq is going through its worst security crisis since the 2011 withdrawal of US troops.

ISIL, a splinter of Iraq’s al-Qaeda branch, controls large swaths of the country’s north and west after capturing Iraq’s second-largest city of Mosul and the majority of the western Anbar province last year.

ISIL has been carrying out attacks against government forces, and now holds about a third of Iraq and neighbouring Syria in its self-declared “caliphate”.

Since its emergence, Baghdad and other large cities have seen near-daily attacks, with roadside bombs, suicide blasts, and assassinations targeting Iraqi forces and government officials, with significant casualties among the civilian population.

The violence has killed hundreds and displaced tens of thousands of Iraqis. 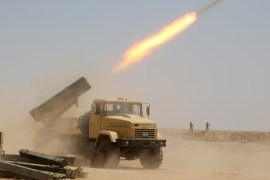 Iraqi forces clash with ISIL in push for Anbar 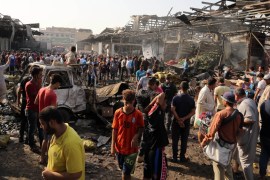