The UN humanitarian chief has said he is alarmed that UN agencies have been ordered out of eastern Ukraine’s separatist-controlled Luhansk region by the “de facto authorities” there.

In a statement on Thursday, Stephen O’Brien’s said the agencies had been told to end operations and leave by Friday, and several international non-governmental organisations have been told to leave the region by Saturday.

It is rare that UN agencies are ordered to cease operations in a country or region.

Earlier this month, the UN human rights agency said at least 7,962 people have died in the conflict.

O’Brien’s statement does not name the NGOs being ordered out, though Medecins Sans Frontieres (MSF) issued a separate statement on Thursday saying it was “extremely concerned” by the move. MSF said it has closed its office in Lugansk.

UN operations in Donetsk are also in peril, O’Brien said.

O’Brien called the failure of authorities in the separatist-dominated regions to allow humanitarian access “a blatant violation of international humanitarian law”.

Humanitarian shipments to separatist-held areas of Ukraine have been curtailed since July because of new rules imposed by fighters that require aid groups to register before they can operate there.

The UN is concerned that 1.4 million Ukrainians are internally displaced or have become refugees.

O’Brien said the order for UN agencies to leave follows the rejection of applications by UN agencies and all international NGOs working in Luhansk to work in the area.

He said the restrictions on humanitarian shipments have kept about 16,000 tonnes of supplies, including food and shelter from being delivered.

“Hospitals cannot perform surgery because they lack anesthesia,” he said. “Some 150,000 people are not receiving monthly food distributions.”

O’Brien said the suspension of shipments is putting lives at risk and is “having a serious impact on some three million people as winter approaches”. 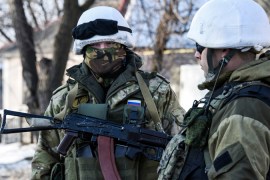 Violence and suffering in Ukraine’s east

As fighting rages along the Ukraine-Russia border, fears grow of a return to all-out war. 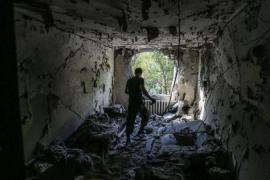 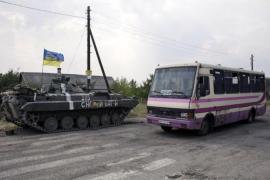 Kiev says Red Cross to lead international humanitarian mission to conflict-stricken Luhansk, with backing of US and EU.