Pope Francis has called on the US to build a “truly tolerant and inclusive” society that rejects discrimination and said that climate change is an issue “which can no longer be left to a future generation”.

Francis, the fourth pope to visit the US, was speaking at the White House after he was welcomed by President Barack Obama on Wednesday.

In his remarks, the pontiff called for the protection of religious liberty and asked American Catholics to reject discrimination.

American Catholics are committed to building a society which is truly tolerant and inclusive.

“American Catholics are committed to building a society which is truly tolerant and inclusive, to safeguarding the rights of individuals and communities, and to rejecting every form of unjust discrimination,” he said.

On climate change, the pope praised Obama’s focus on the environment and called on the international community to protect “our common home”.

“We are living at a critical moment of history,” he said.

“We still have time to make the changes needed to bring about a sustainable and integral development, for we know that things can change.”

“We wish to commit ourselves to the conscious and responsible care of our common home,” he said.

In his remarks, Obama welcomed the pontiff’s work to lift up the poor and his commitment to fight climate change.

“Holy Father, you remind us that we have a sacred obligation to protect our planet – God’s magnificent gift to us,” he said.

Obama also thanked the pope for his contribution to the US’s “new initiative with the Cuban people”.

The pontiff played a crucial role in brokering the recent talks between Havana and Washington which have resulted in a thaw in relations.

Al Jazeera’s Patty Culhane, reporting from the White House, said President Obama and the pope in their speeches focused on issues they agreed upon, including refugees, climate change and immigration.

“Obama and the pope didn’t mention the issues such as gay rights and abortion, which conservatives in the country hoped that the pope would bring up. Those are areas (on which) the pope disagrees with the president.”

Culhane also said: “The pope really focused on climate change, showing what he is probably going to be talking about at not only at the UN General Assembly, but also at the US Congress. That is going to be controversial as there are many Republicans who believe that climate change does not exist. And the pope acknowledges that it exists.”

Later in the day, Francis will meet 450 of the country’s bishops at a conference at the Cathedral of St Matthew the Apostle.

Many of the bishops have struggled to come to terms with the pope’s new, social justice-minded direction of the church.

They prioritised drawing clearer boundaries for Catholic behaviours and beliefs in the face of legalised abortion, advances in gay rights, and the exodus of many Westerners from organised religion.

On Wednesday, the pope will also canonise a Spanish friar who brought the Catholic faith to California. 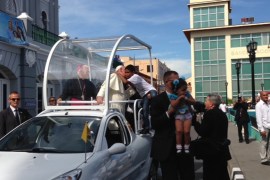 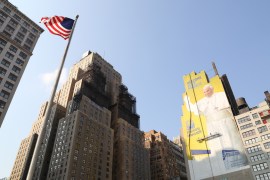 Rock-star US welcome expected for the ‘people’s pope’

Francis has steered away from rigid Catholicism and set his sights on issues such as climate change and refugees.