At least 22 refugees, including four children, have drowned after a 20-metre wooden boat sank off Turkey’s coast.

Amir Cicek, governor of Bodrum, said on Tuesday that a total of 249 refugees were rescued.

“Twenty-two migrants remained under the boat and drowned. Search and rescue work has been completed,” he said.

Cicek said the boat had a capacity of 50-60 people, but was carrying 271 people on board.

The private Dogan agency reported that the boat sank in international waters between Datca in Turkey and the Greek island of Kos.

It was not immediately clear where the people were from, or what caused the sinking.

The incident comes two days after 34 refugees, including 15 children, drowned off the Greek island of Farmakonissi when the wooden boat they were on sank. Nearly 100 other people were rescued.

More than 250,000 people have entered Greece so far this year in an attempt to reach the more prosperous northern European countries.

The vast majority are Syrian refugees making the perilous sea crossing from the nearby Turkish coast.

Al Jazeera’s Bernard Smith, reporting from Istanbul, said that despite the closing of the border in Europe, the surge of refugees from Turkey to Greece continues.

“There’s no impact on the refugees trying to leave Turkey,” he said. “The latest incident is an indication that there are still a large number of people trying to cross the Mediterranean.”

The governor of Turkey’s northwestern province of Edirne said nearly 7,000 asylum seekers in the past week have been caught and turned back as they headed towards the country’s western borders with Greece and Bulgaria, according to Turkey’s state-run news agency.

Anadolu Agency quoted Governor Dursun Ali Sahin as saying Tuesday that the refugees would not be permitted to walk to the Greek and Bulgarian border crossings. They were being returned to the areas they had been registered in within Turkey.

The police and gendarmerie have increased checkpoints at the entrances to the city of Edirne, Anadolu said.

In Istanbul, hundreds of people trying to reach Europe have gathered at a central bus station, hoping to travel north.

The group said they had been waiting for hours on Tuesday and would walk about 300km to the Greek border if they were unable to board buses headed there.

Refugees said they were planning to stage a sit-in protest near the border with Greece hoping authorities would allow them to cross into Europe overland.

Elsewhere, almost 300 refugees have been rescued off the Italian coast.

The refugees were brought to shore by Italian and Croatian rescue boats. Those rescued said they set off from Egypt, and spent 12 days at sea, changing boats several times. Most of them are Syrians and Egyptians. 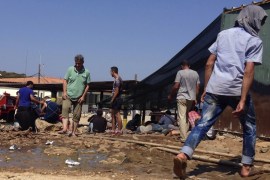 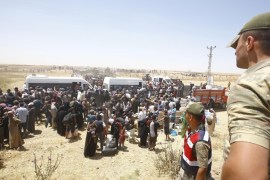 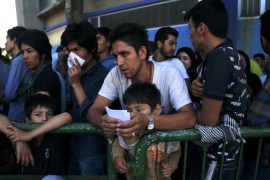