Israeli Prime Minister Benjamin Netanyahu has launched a campaign to mobilise Jewish Americans against the nuclear deal between Iran and world powers championed by President Barack Obama, which is facing review by the US Congress.

In a webcast organised by Jewish groups in North America, Netanyahu reiterated Israel’s arguments that the July 14 deal was not enough to curb Iranian nuclear projects with bomb-making potential. He argued that a windfall in sanctions relief could help Tehran finance destabilising regional conflicts.

With surveys showing American Jewish opinion mixed on a dispute that has strained the US-Israeli alliance, Netanyahu cast his opposition to the Iran deal as non-partisan.

He also pushed back against the Obama administration’s counter-argument that the deal was the only way to avoid eventual war with Iran.

“This is a time to stand up and be counted. Oppose this dangerous deal.”

Organisers said 10,000 people – not taking into account expected group audiences – had signed up to view the webcast.

That might translate into grassroots pressure on US congressmen and congresswomen weighing ratification of the deal by September 17.

OPINION: The Iran deal is good for Middle East peace

“It is safe to say that the opponents of the deal have been much more vocal and active in expressing their case. Thousands attended a very organised Jewish rally against the deal in New York,” Al Jazeera’s Kristen Saloomey said, reporting from New York.

“The Citizens for a Nuclear-Free Iran is an organisation that has been recently born. It is spending some $1.7m to lobby against the deal. They are trying to get people to call their congressmen and congresswomen to push them to express their concerns,” she said.

Having infuriated the Obama administration by speaking against Iran in Congress in March at the invitation of the Democratic president’s Republican rivals, Netanyahu cast himself as the emissary of an Israeli public that, polls show, mostly shares his misgivings about the deal with Iran. 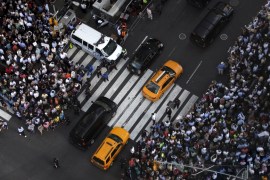 Protesters converge on Times Square as US Secretary of State John Kerry briefs members of Congress in Washington. 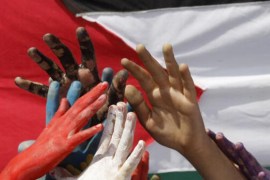 The Iran deal is good for Middle East peace

The international unity forged in Vienna may be able to resolve other deep-rooted regional problems in the region. 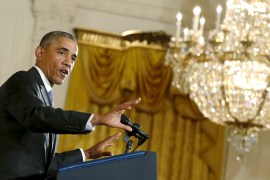 Obama urges passage of Iran nuclear deal in US Congress