Three Gulf countries have issued warnings over travel to Lebanon after peaceful anti-government demonstrations in Beirut turned violent over the weekend.

Bahrain, Kuwait and Saudi Arabia issued the warnings after protests that began over the country’s uncollected rubbish escalated into mass protests over perceived government corruption, and power and water shortages.

Bahrain on Monday called on its citizens to leave Lebanon immediately and avoid travelling there in the near future “out of its keenness for their security and safety”.

The Kuwaiti embassy called on its nationals to remain vigilant for their safety at all times. “Under the current critical circumstances, the Kuwaiti nationals in Lebanon are advised to cancel any unnecessary plans and leave,” it said in a statement.

Saudi Arabia’s foreign ministry urged all Saudi citizens in Lebanon to exercise caution and to check in with the embassy.

A protester was killed and at least 40 other people were hospitalised as the demonstrations escalated and turned violent on Sunday.

The “You Stink” protests started on Saturday over the government’s failure to remove rubbish but escalated into a platform for thousands of people from all walks of life to express their dissatisfaction with the government.

Sunday’s violence prompted the organisers to postpone a mass rally scheduled for Monday. 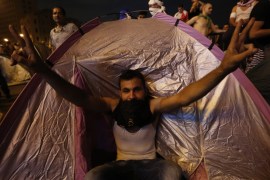 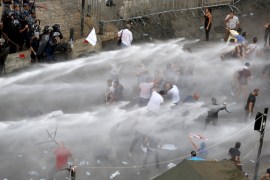 Second day of “You Stink” protests kicks off as Lebanese Prime Minister Salam calls for an urgent cabinet meeting. 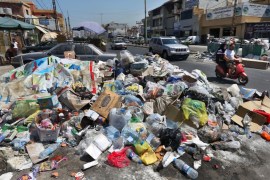