Ieng Thirith – the sister-in-law of Pol Pot – has died in her home in Pailin province, one of the last strongholds of the Khmer Rouge. She was 83.

She died at 10:30am local time on Saturday, her lawyer Phat Pouv Seang told Al Jazeera. She had been severely ill for several months, requiring oxygen and a feeding tube after being hospitalised in Thailand.

In September 2012, however, she was remanded to the custody of her family after the court deemed her unfit to stand trial.

“She remained under judicial supervision until her death,” according to a statement released by the Extraordinary Chambers in the Courts of Cambodia (ECCC) on Saturday.

A senior-ranking member of Democratic Kampuchea, Ieng Thirith stood accused of crimes against humanity, genocide and grave breaches of the Geneva Conventions of 1949.

Though she did not remain on trial long enough to see a verdict issued, the court’s indictment notes that the minister was involved with senior policy decisions and actively participated in the regime’s largest purge, among other crimes.

A Maoist-inspired communist regime, the Khmer Rouge sought to launch an agrarian revolution in Cambodia.

An estimated 1.7 million people died from overwork, starvation and murder between April 1975 and January 1979, when the Khmer Rouge ruled Cambodia.

In spite of the atrocities committed, justice has been slow moving in Cambodia, where only five people have faced trial at the hybrid court jointly administered with the UN and the Cambodian government.

The current case, which involves the regime’s senior living leaders has been mired in allegations of political interference and mismanagement and slowed down by the poor health and old age of the accused.

In March 2013, just months after Ieng Thirith was released, Ieng Sary died – leaving only two senior leaders to stand to account for the victimisation of millions. 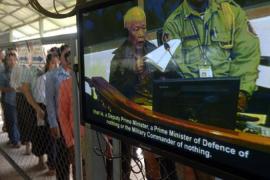 As two senior Khmer Rouge leaders appear in court, we ask if their trial is mere symbolism or if justice will be served. 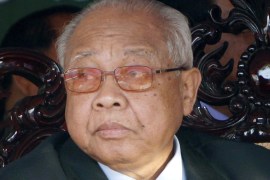