Italy’s interior minister has voiced anger over an extravagant funeral held for an alleged Mafia boss, whose coffin was carried through the streets of Rome in a gilded horse-drawn carriage as rose petals were dropped from a helicopter.

Posters outside the San Giovanni Bosco church in the east of the city on Thursday declared Vittorio Casamonica the “King of Rome”, while mourners were greeted with music from the film The Godfather.

Interior Minister Angelino Alfano and Rome’s mayor Ignazio Marino said on Friday that they were furious at the defiant spectacle, as the city’s police chief admitted to “a failure in the system”.

“It is intolerable that a funeral should be used to pass Mafia messages,” Marino said on Twitter.

The funeral’s level of ostentation prompted Alfano to demand an explanation from city officials – especially after reports that police and Carabinieri patrols accompanied the funeral procession.

Italy’s civil aviation authority on Friday suspended the licence of the helicopter pilot who flew low over Rome to drop flower petals during the funeral.

Although he was never convicted of being a Mafia don, the 65-year-old – who died of cancer – was the alleged head of Casamonica clan, which reportedly runs drugs, fraud and extortion rings in Rome.

The group is among crime networks accused of infiltrating the city’s government and influencing politicians in a spiralling corruption investigation.

The day before Thursday’s funeral, a judge had set a date for the trial of 59 people charged in relation to corruption around the awarding of city contracts.

The event has gone down particularly badly because in 2006 the same church refused a funeral to a terminally ill poet, Piergiorgio Welby, who was helped to die by one of his doctors in a case that divided Italy.

But the new priest in charge of the church said he knew nothing of Casamonica’s past, or of the pomp his friends had planned for his send-off. 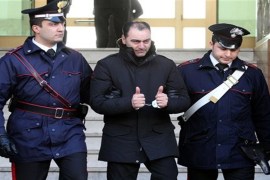 The most powerful mafia you’ve never heard of 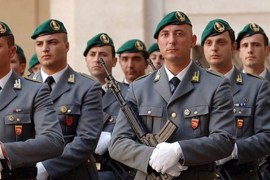 Financial authorities say billions of dollars worth of public contracts last year were lost in fraud or squandered.